Would you believe that the last time I did a party review was 3 1/2 years ago?

It's because after that review, I decided that unless a party offered the beauty of ethnic and color diversity in their go-go boy staffing that display what makes the skin rainbow in NewYork City so beautiful, then such a review would be a waste of my time. For there would be nothing to commend.

You see, you can claim to be "all-welcoming" and "find all colors beautiful" all you want, but if it's not shown in your go-go boys, then all you're speaking are words. And the age-old saying "Action speaks louder than words" has proven itself to be true too many times over for anyone to try disproving it.

Well now, after all this time, I have a party to give such praises to. That party would be the weekly underwear party, Playpen Mondays at The Cock. 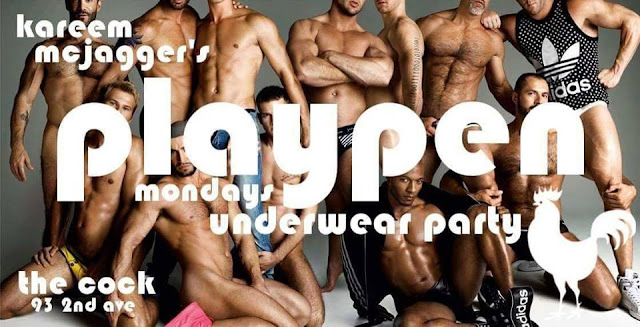 Every visible body in a bar/club's staff should be reflective of the all of the various skin tones and ethnicities that make up that city. Thereby, making it beautiful. And thereby, telling patrons of all colors and ethnicities that all of them are beautiful. If any color/ethnicity is purposely dismissed from the canvas, then whoever is doing the hiring for that bar/club party is doing the job wrong. Unfortunately, that's the case of many parties in NYC gay nightlife. Hence why I venture to so few parties, and tips few go-go boys when I do go out.

I'm sick and fuckin' tired of NYC gay party promoters shoving only vanilla and caramel down my throat! Especially since too many of them act entitled, and either "hook" up with patrons on the job, instead of doing the actual job, which is to be rhythmic eye candy. Well, there's milk and dark chocolate out there to feast my eyes on as well. And when I go out, I want my eyes, mouth, and the rest of my body craving to taste the skin rainbow. 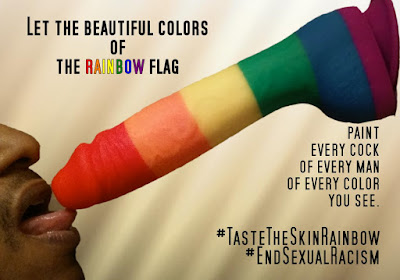 It's a sensation a bar/club's party (especially in NYC) should inspire in others as well by their go-go boy roster. And Playpen Mondays at The Cock is doing that for me now. 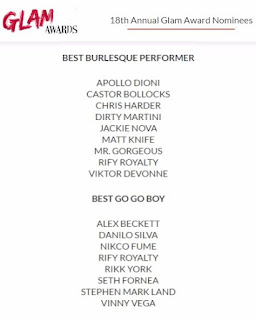 I say this because most NYC go-go boys are either white or light Latino. Occasionally, light Middle Easterners and Asians might get a shot at go-go dancing, but even those 2 are still too much a rarity. This leaves every other color and ethnicity in the skin rainbow totally ignored. Which primarily means Black males. Proof of that fact can easily be seen by a look at the Glam Award nominations for Best Burlesque Performer and Best Go-Go Boy.

That's why I'm glad to say that Playpen Mondays at The Cock does do a rotation with that variety. There I have seen black go-go boys who are simply fit as well as gym-bodied, with hair and without, and closer to my 5'6" height as well as tall.

Due to the ethnic diversity that makes up New York City's population, a gay party promoter in NYC can't be so blind to the need to represent all colors of the skin rainbow. Nor can he be so self-involved in making money that he ignores the reality of racism that exist in this city, and our community overall thanks to gay media. So I commend the host, Kareem McJagger. Whether or not it was his intention, his actions show that he (unlike most in this city) is not the type of promoter who hires go-go boys based on how much he makes in tips.

For the racism of mostly white crowds will tip the white go-go boy most. And this past election has proven that we are not as beyond racial bias (sexually or otherwise) as many white-owned media outlets will try deluding us to believe. But a newly out black male won't see himself as a sexual contender unless the things in our community that inspire us to see ourselves as such dismiss those of particular shades, ethnicities, or even sizes. And our community is marginalized enough. So we have to stop doing this to each other. And that includes gay nightlife doing their part, which is where many gays' confidence in being out and proud begins. With that said, gay nightlife has a responsibility to praise all colors in more ways that just taking their money. That can't be said of many places I've ventured to in my homestead of New York City, but it can be said of Playpen Mondays.

As you can see, if you want to get my attention for your party, and want to spread the word, then have a go-go boy roster whose rotation makes one word easily roll off my tongue....

It is for this reason that I'm liking the diversity of go-go dancers at Playpen Mondays at The Cock. So if go-go boys are a draw as to where you hang out, I recommend going there so you can see what a go-go boy line-up in New York City should look like.

And it also doesn't hurt that when you strip down to your skivvies, you get a free shot. ;-)
Posted by LeNair Xavier at 1:02 PM