The attitude of White entitlement is something that has been around for centuries now. The signs are definitely evident here in New York City. Even if you don't want to admit it.

One of those that don't want to admit it is Facebook, and whoever was the White (or non-White) sell-out who recently reported for posting this update:

White guys with an attitude of #WhiteEntitlement disgust me putting their feet on poles in a #NYC #subway car, or take over seats like they're in their home or office. Then have the fuck-faced audacity to get annoyed when you want (or need) them to move.

Look you fucktard faggot mother fucka! You DON'T own the fuckin' subway train! And you are NOT at home! You need to learn your space and limitations - the same way throughout history, #racist Whites have reminded OR robbed it from others!

Exhibit A - there is a reason Native Americans are called "Native".

And I am more than aware that there are guys of other colors/ethnicities who try to assimilate. And for them I say as I've always said...The follower of a fool is a bigger fool than the original. 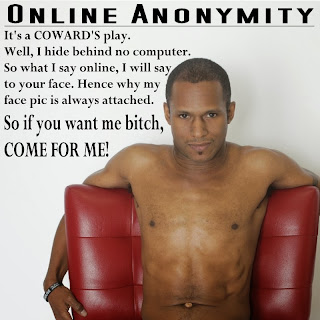 For posting this honest fact about signs of White entitlement in New York City, I was blocked for posting on Facebook for 12 hours. Of course you know that whoever reported me will never have to nerve say it to my face. For the anonymity allowed by Facebook in reporting someone is how they got computer bold enough to write the report and send it in the first place.

Well, in response to this, I wrote this message to Facebook telling them why they were wrong to take such an action:

The reason you were wrong for blocking my statement is because it was based on your own racism. I'm sure had I had been White, you would have had no problem letting that statement go through. It's the reason why numerous news reports show anti-Black, anti-Asian, anti-non-White hate speech with a Facebook page attached to it.

Furthermore, it was NOT hate speech. I was speaking on a bad attitude derived from an ethnicity's history in the USA, which as a American, I should be allowed to do. It's called, FREEDOM OF SPEECH. That is NOT "hate speech", but I'm sure you consider it as such when most of the staff is probably White, and are probably guilty of the very action I'm speaking of.

Now, don't say it was my use of the words "faggot", or some curse word. For I will catch you in the lie there as well. For I see the words "niggas", "niggers", or "niggaz"  on Facebook all day long. Of course you have no problem with that. And you'll wash your hands of it especially if a Black person said it, because that's the loathsome thing you think of us being anyway.  Then I advise you to take the same stand on my saying "faggot", for I myself am a gay man. BUT both of those words have a negative meaning for me that goes beyond the people most consider those words to represent. And if it's any curse word that you have a problem with, AGAIN HYPOCRISY. For there are so many curse words flying around on Facebook now that sometimes I myself am shocked by what I see.

So this blocking is bureaucratic, hypocritical mess on your end. It's not the first time I've heard of it being done by you. And I'm finding it a shame that your own insecurity in character made you feel the need to do so. Thank you.

Well, you know what they say....You can't keep a good man down. And I wasn't down. For while I was banned from posting on Facebook, I did what I've been wanting to do for the past couple of days now.

It's entitled "So Many Songs". More on that whenever or wherever I'll debut it. I just mentioned that to show that something good and positive came out Facebook's douchebag attempt to pretend to be my Mother and give me a "time out". Maybe if they learn from real parenting themselves they wouldn't be doing such overcompensating by virtual parenting, and hating the truth. Just saying....
Posted by LeNair Xavier at 3:49 PM