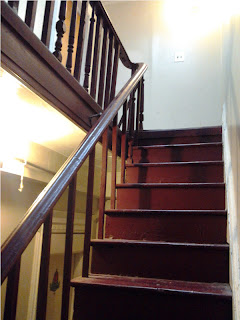 Just like my poem and video Red Light, this poem is also me telling a very true story. And the title says it all. For this time, it's of me hooking up with a neighbor.

Since moving back to Brooklyn, I've hooked up with about 6 guys who live within 6 or less blocks from my place. But the one in this poem lived even closer than one block away. He lived just one floor up right over my head, with the photo to your right being that of our apartment doors and the staircase connecting us. Notice my "L" crest on the bottom door? 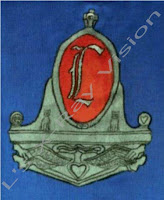 So when I said "neighbor", in this case, I really meant "neighbor".

And don't judge me. For I'm sure a good number of you have either laid some pipe, or had some pipe laid in you from a neighbor who lives just as close by. So I'm sure you will have no problem relating. Enjoy. ;-)

Love Thy Neighbor, Fuck Thy Neighbor
Neighbor invites me up to smoke haze and chat
A.k.a. pre-interview
For once I heard him ask my cock size
Only a fool could miss that as a clue
Fast forward to my approaching birthday
There I was being coy
As he offered his cakes to rub light on my candle
To get cream-filled by this birthday boy
I turned him down, but then told my friends
Doing this my body knew “doth protest too much”
He was wearing me down, and in a matter of time
Our dicks and asses would be in deep touch

After I sucked it, he whispered, “Take it”
As I straddled him taking every last inch in
Then while still in my tight hole, I was put on my back
For him to thrust, then gush his man-milk within
He often called at an hour so late
My cock was good for jerking off at best
But one night I got hard just enough
To feel the warmth and nice grip of his flesh
Then he asked if he could take my ass
I obliged, he gushed, and we were wet
You know quick intense sex has happened
When it even makes your ears sweat
Its intensity was Fate saying goodbye
For soon after came moving day
The end to lust laden lays
Just one flight of stairs away

The good book says to love thy neighbor
It never said to fuck thy neighbor
I found myself in a prudish moment
Thinking it inappropriate behavior
If it was, then we gave in to the sin
Of mutual lust from mutual consent
And with other sinful neighbors nearby
No sense being sad
Or dare repent
Posted by LeNair Xavier at 7:07 PM