One beauty of having your own laptop keep in the solitude of your room is that you can be as much of a pervert about it as you want to be. Namely, through your wallpaper. For this is a screenshot of the wallpaper I had on my computer at the time my song "Enter, Thrust, Throb, Cream" came to mind. 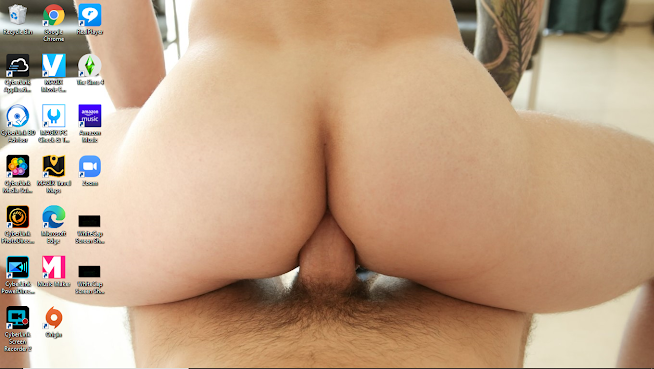 It's a still from a NextDoor Studios scene in which Michael DelRay tops Scotty Zee. So that's Scotty Zee cute butt.
For me, sex is art. So while this photo does turn me on, I don't stop and jerk off to this pic. I turn on my laptop see the nature-created artistry of a cock inside a nice wanting ass, and get to work.
However, on one particular day, I got up to take a break from a project. In doing so, I closed the web browser and all open windows, leaving me to see just that wallpaper. Suddenly, a subconscious thought came to me. I can tell it was my subconscious because as it reached my conscious mind, its volume slowly increased. It was 4 words said rhythmically describing what was going on in the picture, and the result. I knew that because while I couldn't instantly figure out what the middle 2 words were, I knew the first word was "Enter" and the last was "Cream" - 2 words I use very often when describing the process of sex.
As I thought more about it, I realized the other 2 words were to describe actions that fascinate me during sex. Knowing how I've always been fascinated how penetrative sex is a simple thrusting back and forth that brings one so much euphoric physical pleasure, it should be no surprise how the next word was "Thrust". Followed by the next fascinating thing during sex is the various times a guy's cock will throb as he's getting closer and closer to orgasm and ejaculation. Making the other word "Throb".
With the words now set in their rhythm, next came describing each word's part in sex from the entering of the penis to the ejaculation(s) that often concludes it. And this is the end result a cappella:
Posted by LeNair Xavier at 1:51 PM