Reunion/Redemption Sex In The Men's Den 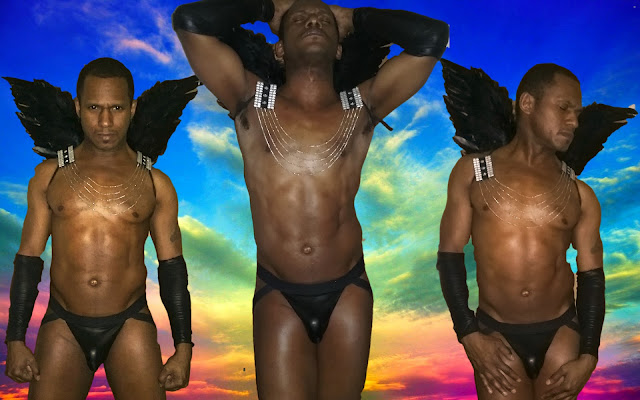 About 2 years ago, I wrote a post for my LXtreme Tumblr titled "Swiss Navy, Change Is Not Always Good". It was a tale about a sex party in which I experimented with Swiss Navy's Premium Anal lube with a playmate I've had the pleasure of having inside me before. The lube however, has clove flower extract, which is a natural ingredient, but causes numbing. This in turn led to me being denied me feeling the pleasure that time around. Not to mention that numbing turns off your body's natural alarm to tell you and your partner if you're overdoing it. Luckily, my playmate was skilled enough to not put me in that situation.

I had a number of guys tell me they were glad I wrote the post. Whoever handles Swiss Navy's Twitter account obviously felt differently. For one random day, I decided to go to their Twitter page...

All to discover that I was BLOCKED.

Oh well, they're not the best lube anyway. So there was no need to be devastated. What was devastating me was my not being able to redeem myself to my playmate from that encounter. For we saw each other at a couple of parties since that one. However, I was not prepared to bottom. So for 2 years thus far, since I strive to give the best of myself even in my casual sex encounters, in the back of my mind was a desire to have some reunion sex with him to redeem myself. I owed him for my pretending it was great sex. Especially when the fact that it wasn't great that time was not his fault in any way, shape, or form.

I recently went to a party called "Men's Den". It was only my 2nd time going. The 1st time I went, I was a bit of a wallflower. This time, I was sure me being a wallflower would not be the case. I just didn't know how soon after my arrival.

As soon as I walked in, I noticed a white guy who looked familiar, but before I could get settled in the room and investigate it, an older white guy approached me. I felt some sexual attraction to him, but his aggression of not letting me get settled in made the attraction short-lived. So I politely moved his hand, and stood on the side to settle in. Once I felt more settled, the guy I noticed as soon as I walked in came near me. His immediate look at me told me why he looked familiar. It was because he resembled my playmate from "Swiss Navy, Change Is Not Always Good". Then "resembled" turned to certainty once we greeted each other with "Hello".

We stroked each other's cock immediately after that "Hello", and started making out. So the sexual spark between us was definitely still there. But I didn't want to get my hopes up that night was going to be the night I could redeem myself.

At one point during our making out, I had my back to him, and he played with my nipples and cock. There was a dark-skinned black guy with this beautiful ass standing at a diagonal from me watching all of this. Me and my playmate both saw him, and moved closer to him. I laid down on my stomach on the edge of the bed with my playmate on top of me. The black guy's rock hard cock was right in my face, and I started sucking on him because he was a hottie on my To-Fuck list. Because that guy had an ass I couldn't decide if I wanted to put my cock in it, or grope it in missionary while he stuffed me with his big, tasty dick.

If my personal mission wasn't to redeem myself to my reunion playmate, I would have gladly made what was starting as a 1-on-1 into a 3-way. However, I'm not your typical gay male, jumping from one guy to another, even before I've even finished what I started with the one I'm already with. In short, even as a sex party tryst, I'm loyal. So since I was already in the midst of playing with my reunion playmate, I reluctantly stopped sucking on the black guy's cock and proceeded with my reunion playmate. As we continued, he grabbed a condom. That made me realize that my wish for the night was coming true. He was going to top me.

We got more on the bed. He laid me down on my back. I raised my legs, relaxing my hole to take him inside me. My hole twitched watching him put the condom on his hard dick, because it meant I was that much closer to having my ass filled with it, then his thrusts. So when the head of his dick touched the edge on my hole, it sent a tingle on my hole. A tingle that started spreading all over my body the more his cock went inside me.

While I could still hear chit-chat in the room, his tall frame hovering over me made me forget all about them, while also blocking my view of them. He was all I could focus on. Correction, he was all I wanted to focus on.

We later changed positions to where he was on his back, and I was riding his cock. Next to us was a cute light Latino getting his dick sucked. He looked at me, and tried to kiss me. Since I knew my reunion playmate didn't mind me playing with others in some capacity while with him, I let the guy kiss me. We both liked how the other kissed, and we kept going back for more. Our kissing got to be so much that I didn't want to part with it. Nor did I want to stop riding my reunion playmate's cock. So I had to re-position myself to do both comfortably.

I turned myself to ride my reunion playmate's dick at about a 45 degree angle, and stretched my left leg out. I moved my right leg in between my top's thighs, put myself back in the squatting position, and rode my top's cock while kissing the hottie still getting sucked. Yes, I showed myself to be quite flexible for 46 years of age.

I don't need to go any further with how the action went. For my goal was accomplished. He laid his pipe inside me, and because that Swiss Navy lube wasn't part of the picture, I felt every sweet sensation from his every thrust of, and every ride on his dick.

Some of you are probably thinking, "He was just a fuck, not your boyfriend. So why all of the concern of wanting to 'redeem' yourself, or 'do right by him'?"

It's because, even if he's a tryst at a sex party, or a bar backroom, he is still a human being. And his actions towards me more so proved that.

For he never treated me like he wanted me just because I was Black. He never talked about me "loving his white dick", or him "loving my black booty". I simply had an ass he wanted to fuck, and at times, a dick he wanted to take in. No mention of color required. And when he topped me, it was with passion. Not aggression to emulate a modern-day rendition of a white man raping his black slave. Nor did he ask for aggression from me topping him where I was the black male using hole-tearing sex on him to avenge the abuse my forefathers suffered from slavery. That was not us. Even more deserving of a reward since all of our previous trysts were at a party that fetishizes black males in its marketing. Very contrary to this party whose marketing puts everyone of every color and ethnicity on the same level. So with the aforementioned negative actions having no place with us, if I screw up a fuck, he (and any man like him) deserves my desire to redeem myself. Making it my duty to give my booty when that opportunity for redemption presents itself.

And here was that opportunity, and I'm so glad that I honored it.
Posted by LeNair Xavier at 4:10 PM