Sex Party of Appreciation Or Fetishizing

So I unleashed the truth by telling him specifically what that problem is...Sexual racism, and how it is very much alive in 2017. Even though we have a great host that is welcoming to all colors and ethnicities, a number of guests are not that open-minded. Their actions show that if you don't fit into the color spectrum of white to light, then you get a polite "Hello" (if that), and nothing more.

In the midst of my saying this and more to further explain my point, I think that in my passion, my voice carried. For I heard one guy say to another in the next room, "It's just sex, You're overthinking it!"

Maybe it wasn't them kiki'ing over what I was saying. However, since that response is a very common racially insensitive white response to when I address the issue of sexual racism, it's only natural for me to feel it was very likely directed at what I was saying.

lenairxavier@ciscofashionnyc Because the only way one can get away from it is if they're such a coward about the reality of racism that they attend an all-black party. And since I love and honor the diversity that comes from being born and raised in the USA, and a native New Yorker, I'll be damned if I'm going to let some racist trash heaps chase me out of a place. Especially when some there do appreciate me, furthering the intent of the welcoming inclusive host.

As long as that reply is, because it was Instagram, I didn't reply with as much voracity as I will now by adding:
Being black and allowing myself to be exiled to attend an all-black party makes me just as racist and cowardly as the whites whose actions exiled me there. Furthermore, what exactly is an indicator for Black males to "go where you will be appreciated"? Is that attending a party catering to "bruthas and their admirers"?

If so, then that's advising that I attend a party enabling more racism. For attending such a sex party, says I'm low enough on self-esteem to allow myself to be made a fetish of. Because the non-black "admirers" attending such parties are there for that purpose, even if they're too brainwashed with white/light entitlement to realize it. Plus, enough porn companies pull that crap, leading a plethora of ignorant whites and non-blacks to follow it. And for that reason, instead of sticking my dick in their ass to give them some "big black cock",  sticking my fist through their face and beyond as punishment for their ignorance sounds a lot more inviting. So to avoid going to that dark place, I don't attend events marketed in that fashion.

After my initial response, I then got this question asked:

lenairxavier@ciscofashionnyc Because those with dark hearts do so because no one calls them on it.

The racism of gay media endorses and enables their dark hearts. And that damage will never get undone unless someone with the means to do so holds them accountable. Social media gives us all a means to do that. Plus, their behavior is rooted in narcissism. So they want attention "all about them"? Then they should have been careful with what their actions wished for.

Which brings to how those who appreciate me not being narcissists. So they don't need the public praise. And I have offered it to them. But many I talk to about giving it to them don't want it, even anonymously. It's because they know who they are, and the good they have within. And you can't help but respect them for that in the way they see fit.

Again, I let some explanations slide in my response. First, with hindsight being 20/20, I realize that answering my fellow black partygoer there with the risk of being overheard was me subconsciously giving the guilty their overdue calling out for their behavior. And it seemed to spark a reaction that paves the way for a discussion to many black males are guilted by whites into not having, with themselves or with whites. So at first I would have apologized for answering the question at that time. But now I see it was the right thing to do.

My playmate from that encounter was a white male who resembled white straight porn actor Mark Ashley. The reason I didn't highlight his appreciation of my darker skin to his pale skin was because it was just that - appreciation. Not fetishizing. Giving me such a level of peace that in telling the story, instead of focusing on the presumed absence of racism (sexual or otherwise), I was able to focus on the sexual bliss. For our attraction to each other was not me seeing him as an attractive white man, or (as far as I knew) him seeing me as an attractive black man. We saw each other simply as 2 attractive men. With skin color not being a necessary part of that beauty. When skin color is not part of the discussion, it makes for a beautiful tryst. And that's how it should be.

This is not to say that I'm against praising a man's skin color. Because I have been blessed with the gift of sight to see your skin color, and I maintain the wisdom to find both light and dark skin worth admiring. But sexual racism being what it is, we have to be mindful to not tell someone too much about that aspect of their beauty we are admiring. For too early of a reveal can lead to us giving ourselves to a racial fetishist, then calling them our lover, then life-partner. So one should let the overt admiration of their skin color be earned over time. 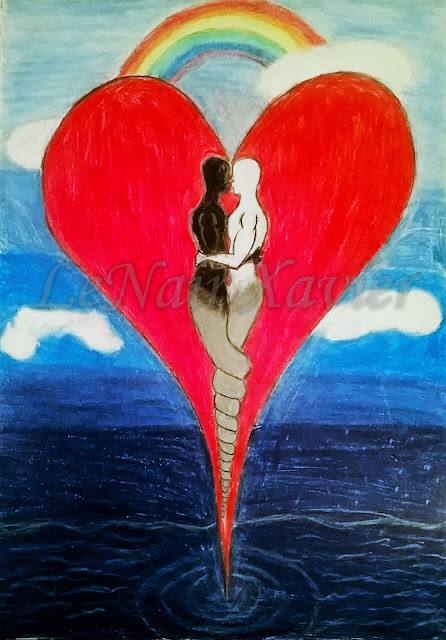 With all that said, what keeps me coming back to that party? It's who I mentioned before - the inclusive host. While a number of the white/light guys there will stick to their racist white gay media-endorsed mantra of "it's a preference", totally oblivious to their own racism, the obvious welcoming of the host is what keeps me coming back. For that welcome is true appreciation.

Now, if you go to a party, and the host is fake, and obviously unwelcoming, then that is when the beauty of your skin color is not appreciated. And that is when your patronage should cease. But as long as the host is doing their part, keep coming back.

Posted by LeNair Xavier at 4:50 PM