Fucking The What Out Of Me 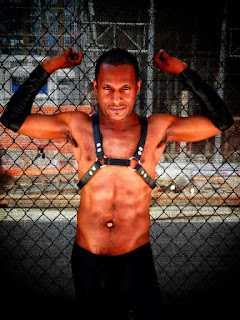 I recently went to the Rainbow Playground up in Queens for a Tuesday night CumUnion party. As soon as I arrived, I found myself watch by a couple of guys. Both were good looking and had nice bodies. So why was I hesitant, and stand-offish? It's because I'm humble enough to not be arrogant about the compliments I get on my looks. So their pursuit of me was a bit overwhelming. Plus, it had been quite awhile since the last time I was at a sex party there. So I needed to feel the vibe, and find my comfort zone in this space uncommon to me.

Once I settled into that comfort zone, I found myself standing as the right angle in a right triangle between those 2 aforementioned guys. The place was so dark in that particular area that I decided one of these guys were going to get me. Top or bottom, someone was getting it. So it was decision-making time.

There was a short well-built Latino, and a light skin guy who was either Black or Latino. I chose the former. After all, I liked him from the moment I saw his silhouette. And as I walked towards him for a better view, I like him even more. Plus, I suspected he was more of what I needed. Time would only tell if I was right.

Well, I'm glad I was wrong.

Uh, remember that saying "Be care what you wish for". Ummm, I got what I wished for. We fucked missionary, doggy, side saddle, Y. I remember throwing my ass on his dick  in missionary, and even more so during doggy style. As the time of his in me seemed usually long for a sex party fuck, I became more verbal. At one point during doggy style, I buried my fists into the mattress and started thrusting my ass onto his cock while he was thrusting into me. Both parties moving like this doesn't usually work because they have to both be on the same exact beat and rhythm. And as it turned out, not only were we on the same rhythm. But we were actually following the beat of the electro-dance music playing.

Electro-dance music, which I hate. Because that music was why I had no idea how long he was inside me. It's because that fuckin' song never seemed to goddamn end! I just assumed we were at it for about 20 - 30 minutes, which like I said, is unusually long for a sex party fuck. That's the amount of time you have sex with a hook-up, or your significant other. Not at a sex party. And trust me, that is merely an observation. Not by any means is it a complaint.

After realizing we were at it for so long, I did the unthinkable...I stopped him. It wasn't because I was so tired of fucking. Because like I said, I needed to bottom, and 20 - 30 minutes at a sex party should definitely scratch that itch good. The oddness of it is because when I bottom, I'm a power bottom. And as good as his cock was, you would think I'd be writing this blog post with his dick still thrusting and throbbing in my ass. So what stopped me? It's because I had numerous moments during the sex where I felt something that maybe those of you readers who are more expert bottoms can enlighten me on.