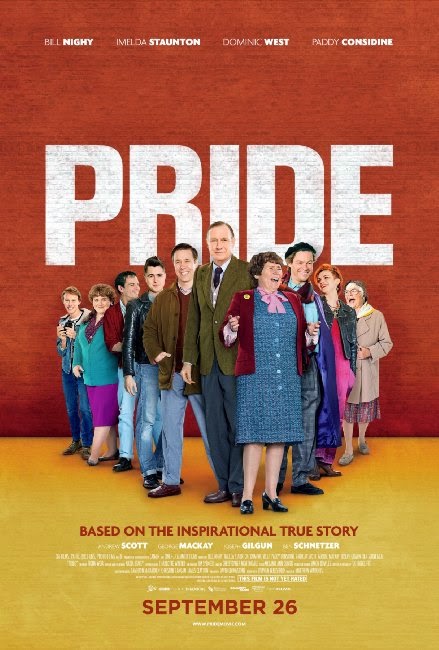 This past Thursday, thanks to Leslie Lohman Museum of Gay & Lesbian Art, I attended a screening of a movie coming out in selected cities of September 26th entitled, PRIDE.

PRIDE is based on a true story that I must admit that knew nothing about. It's synopsis reads:

Realizing that they share common foes in Margaret Thatcher, the police and the conservative press, London-based gays and lesbians lend their support to striking miners in 1984 Wales.

When Mark Ashton (played by Ben Schnetzer) originally proposes the idea of Lesbians & Gays Supports the Miners, many gays in the room turned their backs and left. Feeling miners have done nothing for gays, so why should gays stand up for them. This gave me a sad moment thinking to how 30 years later, this is a lesson the gay community still needs to learn. For it brought to my mind how I quite recently addressed in a blog post where I called out gay media on how they demand acceptance from the mainstream media and arts, but when an all-inclusive event that should get gay support presents itself, 30 years later, gay media's actions still show the attitude of "why should we bother?". In short, the movie addresses how we all need to get over our "whoa is me" attitudes, by simply support one another. Thereby lessening the sadness of the woes. To the point that the woes may soon be gone. For whatever your community, you are never the only ones struggling.

This message was in my opinion very well-written by Stephen Beresford and directed by Matthew Warchus, with humor in just the right places to make a serious message, and under-discussed part of gay culture not create a downer of a movie.

Speaking of humor, a lot of the hilarity that ensues is when the London gays and lesbians are questioned by those in the mining town of Wales about whether or not many of the stories they've been told about gays and lesbians are actually true. Which makes for even greater laughs are times when this small group of gays & lesbians just happen to make some of the more positive theories seem like undeniable facts. Such as how at a gathering of the gays and miners, one of the more flamboyant gay characters, Jonathan (played by Dominic West) who was originally told to turn down his flamboyance, becomes such a hit with the ladies when he decides to get the party going with his dancing skills, that a couple of the straight miners decide they want to learn how to dance...A skill that works for them later on.

So with all that said, I highly recommend seeing PRIDE. It's almost 2 hours long, which for many movies these days creates a snooze-fest if it doesn't have action, explosions, and special effects to be used as filler. But in this case, PRIDE definitely holds your attention. Enough to the point that the action you might find because of this movie, might come after the movie. For this movie just might spark the activist in you.

Posted by LeNair Xavier at 6:37 PM

Email ThisBlogThis!Share to TwitterShare to FacebookShare to Pinterest
Labels: review