The name given to the piercing some guys get in the head of their dick. I've sucked on a couple of guys with them, so that curiosity is satisfied. What one sexual curiosity about the Prince Albert I've had that has not been fulfilled is...

...What does it feel like to bottom for a guy with one?

I've been curious about this for the longest. Ever since I sucked on my 1st cock with a Prince Albert. After all, I'm one of those guys who if I suck your dick, you can take it as an invitation to fuck my ass.

This guy and I have been talking about hooking up for awhile now. Recently, we finally made it come to fruition. But I needed some time after the hook-up to figure out how to explain my experience with this guy's Prince Albert. Because there were some unexpected occurrences during the course of our playtime.

As soon as I walked in the door, we started making out. It didn't take long before we were naked. After my poem "The Hair Down There", all of the hair on from his chest to his treasure trail was a welcome sight. However, an unexpected sight was seeing that treasure trail lead to a pierced cock. Part of the surprise was not only because his cock was pierced, but because he never showed his cock in his online pics. With that being the case, you have guessed correct to believe this hook-up was originally intended to have me as a top. This led to the other unexpected occurrences.

Our emails and text messages to each other made it clear that he was lusting for my dick, and I was lusting for his hole. So the next surprise was him moving behind me, and grinding against my ass. I have no problem with a bottom admiring my ass. It's just that I personally never do it unless I have plans to fuck his hole. We then laid down on the bed, still making out, my dick was getting hard believing it would soon be engulfed in the warmth of his hole. He laid me on my back, and started sucking me off. Now this is what I believe a bottom does to prepare his top. And he was that great rarity - he knew how to suck cock, and suck it well. Well enough that my dick immediately got rock hard. But then I felt the oddity return.

He started fingering around my asshole, then he put my legs up in the air, and started eating my hole. I gave myself the excuse that he was one of those bottoms that liked to eat his top's ass. Well, he liked to eat ass, but for a reason. He wanted it wet. He reached over and put some lube on his cock, then ate my ass some more. When he came up again, he got more lube. However, this time ----he put the lube on my ass. This was the next unexpected occurrence. He dick was now stiff as a board, and he put it against my tight hole. His cock was so hard that it went it easily into my well-lubed ass. The difference of him having a Prince Albert was that 2 rounded edges slipped into my hole and then rubbed against the walls of my ass tunnel - The 1st from the Prince Albert, then the 2nd from his cock. And FYI - both were thick. 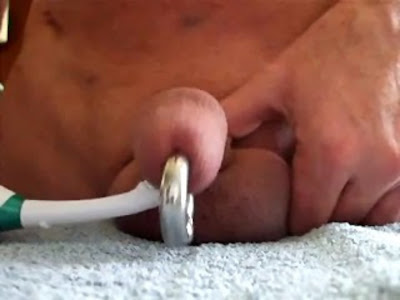 I like pleasant surprises during sex. Hence why I douched before coming to his place, even though I was expecting to top. I thought what if we have so much fun, he decides to invite someone else to the mix after we're done, and that someone wanted to top us both. Instead, there was no other person. It was just the 2 of us, and I somehow became the bottom. And it wasn't because my dick wasn't hard. Quite the opposite. It was just something about my ass made him want in. This wasn't the first time such a thing has happened, and I'm sure it won't be the last. I believe that since I'm not an overcompensating macho top or a "don't-touch-my-cock" bottom, I give off the vibe of my sexual open-mindedness to change up the schedule, and it makes some guys feel comfortable changing up the plans should the mood strike.

Well, I don't regret changing up the plans one bit. For as with most guys who are either total bottoms or versatile bottoms, our acting on the combined knowledge of what works because we've both been in the other's position made the sex AMAZING. His Prince Albert might have contributed to his loud orgasm. One that was so loud that had the wall behind his bed been adjacent to a room with anyone in it, we would have without a doubt had an auditory audience. And who knows, maybe his volume of his moans traveled so that we did regardless. Also, even with the air-conditioner on, he was drenched as if he was a rain cloud that just did a downpour on me. And my kink for wet bodies is part of the reason why while we were both exhausted, I can't speak for him, but with my exhaustion, I could have easily went for another round...or two.

So after much wondering, I have finally experienced bottoming for a guy with a Prince Albert. Was it any different than a guy without one? I honestly don't think so. I believe it did more for him than it did for me. Because it has long been said and proven that the brain is the most sensitive sex organ. It's why the weak-minded are so easily taught attraction. But with my strong mind, the intensity I experienced was more about my intense attraction to him, not his pierced cock that we're told gives us more sensation to the person being thrusted into. So I believe no matter how many times we fuck, Prince Albert or not, as long as that attraction to him is there,....I'm going to like that dick.
Posted by LeNair Xavier at 12:44 PM