Spoons In The Dark

If this isn't your 1st time at this blog over the last 2 weeks, then there's no doubt in my mind that you saw me promoting my appearance at the monthly erotica salon event, "Titillating Tongues". As I said in promoting it, I was going to unfamiliar territory to you. For you may have heard me sing in videos I've made, but never singing an original song of mine live. And you've seen videos of me dancing, maybe even seen me go-go dance, but not doing a planned striptease.

When I first walked in, I was sitting alone, so I decided to sing the lyrics to my original acappella song, "Spoons In The Dark". But there was a problem...

I couldn't remember my lyrics fully. What made me even more pissed with myself was the fact that I left my song lyrics at home. However, my saving grace was having the song on my smartphone. So I was prepared to run either to the bathroom or outside to listen to it. But it was a saving grace that I didn't need to use, because once I told myself to relax, the lyrics came back to me. Evidently, this was just a moment of performer's anxiety brought on by this new undertaking in my post-porn life. 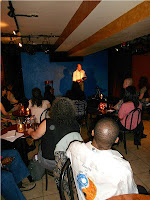 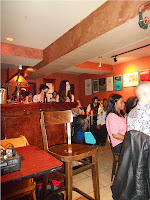 There was a 15-slot open mic where people had 4 minutes for their presentation, while featured performers like myself had 10 minutes. Being quiet and unassuming, I sat there very attentive to each performer. After all, it is good karma. And boy did it ever pay off.

I opened my mouth to sing "Spoons In The Dark". They were struck by my voice, then by the harmonies of my background vocals on a CD. THEN the segue into "Come To Me" by JC Chasez for my striptease, which samples the 80's hit, "Sunglasses At Night" by Corey Hart.

So that sitting there quiet and unassuming beforehand made them never see me coming.

One flaw I did notice in my performance was that I was smiling...at the women. Yes, I'm bisexual, but the problem with that is that the lyrics are obviously about me missing nighttime spooning with my boyfriend or husband. Not my girlfriend or wife. But I know why I was smiling. It was because I was happy. For this may have been my 1st time since porn that I performed on a stage where there was no contest pressure, no rules restricting me so I would get paid, and no fake "happy-to-meet-you, I-love-you" face in order to get go-go boy tips. I was performing, on my own terms, and I was truly enjoying it. This brought forth a high that drug and alcohol addicted music artists are looking for. Well, on this night, I found it.

Unless you read the blog posts promoting the night, you had no idea what I was planning on doing. And that includes the host Aimee Herman and producer Mike Geffner. I didn't let them in on it until they reminded of the fact that they were recording, and I replied by asking where would the video be shown. It was one of those cases where you know the answer, but ask anyway, because I've been to their site and read enough of their Twitterfeeds to know the answer was YouTube. And considering their prudishness towards nudity, especially male nudity, even on age-restricted uploads, I'm wondering if you'll be able to see the striptease part of my performance.

In the meantime, since live performances sound different from recorded ones, I leave you with the original recording on "Spoons In The Dark". It is as I said before, a cappella. For with the exception of the rain and thunderclaps, every sound you here is ME. The vocals, the finger snaps, the beat box - ALL ME. Enjoy. 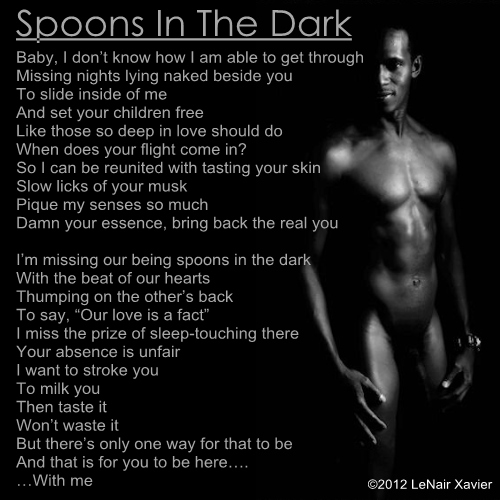