Bullying - The Next Cry Wolf


“Some people want to die so they can be free” 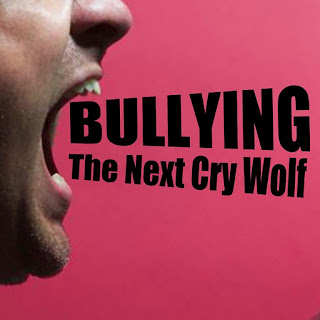 That’s a line from the bridge of the Prince song, “Controversy”. The sad fact is many of our young people are taking that line quite literally by killing themselves as a way to escape the bullying that they endure today. And I will address the severity of this later. But for now, what I must address is how some, especially some gay activists and their followers lacking a sense of self by jumping on a bandwagon are overusing the word “bullying”.
A couple of weeks ago, someone on Facebook asked this question:
What would you tell yourself to make your 2011 easier if you could go back in time a year ago?
When I read this question, since I like questions that make you think, I took a moment and took stock of the past 12 months of my life. 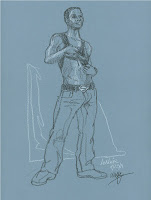 And between working on my poetry series, “The Industry”, presenting the series in January, reading my poetry at the Rainbow Book Fair, invites to model at the Leslie/Lohman Erotic Drawing Studio, appearing in the September issue of Next Door Magazine, and my interview with Swerv Magazine, these past 12 months have almost nothing I want to go back in time to make easier.
However, I must say “almost” because I then realized that there was something that I would go back in time if I could to make 2011 easier. It would be to not give the guy from my poem “Paying (Ends---My ‘Friend’) the time of day. And if you’ve heard or read the poem and its accompanying post, you understand why I feel that way. Hence why my answer to that question on Facebook was as follows:
Stop opening myself up to emotional cripples like "said person". Save my kindness and 2nd chances for someone who UNMISTAKABLY deserves it.
When I said “said person” the fact is not only did I write this guy’s name, but I also tagged it. And when I said before how I wouldn’t give him “the time of day”, I mean that in the most literal sense of the phrase. For me and this guy met at as volunteers at a sex party. During the party, we never spoke to each other. At the end of the party however, after we all got dressed and were preparing to leave, he asked if anyone had the time. Always wearing my watch, I was the one who answered. He was standing across the room from me, and walked over to me while saying “Thank you”, and came over and kissed me. And not just a peck on the cheek or lips, but a full-blown kiss with tongue. And from that night on, we tried making plans to get together to hang out. With me, like with too many guys before, putting in the most effort.
The guy who wrote that Facebook question was not happy with my reply. He deleted it, and sent me and email chastising me for doing a public bashing of someone on his wall. A bad judgment on my part that I accept responsibility for. The problem is he took too far by calling it a form of bullying.
In reply I said:
You're right. It was a public bashing. You are correct in that regard. So my apologies.

However, a public bashing does not always have to be construed as bullying. Especially when in this case, it's AN ADULT being held accountable for what they've done. But that is as you said my personal issue with this person. But it is NOT bullying.

The word "bullying" is becoming so overused, especially by gay activists lately that it soon will become like crying wolf - where no one will pay attention to the cry of it when it's truly needed.
The beginning of his reply reads:
LeNair, I'm not going to get into a semantics war with you. Bullying is the word that I said, and it's the word that I meant.
Now, I have reached a point in my maturity where once I make my correct response to a situation, if what you have to say doesn’t embrace that, you will find your long-windedness ignored. Hence why I never read beyond those 2 sentences of the long-winded yammering paragraph that those 2 sentences come from.  Because I already took responsibility for how I handled the situation wrong.  But I’ll be damned if I’m going to tolerate some weak-minded rider of the gay activist bandwagon bordering on burning another bridge by shaking his “Mommy” finger at me. Because I am not dumb enough to be his spouse, or unfortunate enough to be his child, so I am under no obligation to listen to his bullshit accusation of bullying like too many gay activists are now quick to do when you take the slightest verbal swipe at an adult.
For that is one of the ways that the word “bullying” is losing it validity to the point that is becoming the next cry “wolf”. Another way is because gay activists have now tried to shall we say “corner the market” on being bullied. Thereby being the stereotypical gay narcissist ignoring the larger world of misunderstood youth, be they nerds, acne-sufferers, straight, gay, bi, Black, White, Asian, Indian, rich, poor etc. who needs supports. You need to can your hissy fit when I hold an adult responsible for their misbehavior towards me. Because there is a very distinct difference.
Sadly, an accusation of bullying being on the edge of a gay person’s tongue has now become almost as common as the mouth’s natural production of saliva. The problem is that when it becomes that constant, the accusation can all too often be proven false. Such as in the case I’m talking about now where I can easily prove how I’m being chastised when there are others who really need it a hell of a lot more than me.
Now, this person said in his last response to me that he didn’t want to get into a semantics war with me. Well, my response to him is simple:
If you don’t want to get into a war over semantics, then I suggest you put a lid on your dramatics.
For there are people out there who really are being bullied. Many of them young and failed by parents who are so caught up in their careers that they’re not there for their children and/or school systems that have their hands tied in dealing with the situation. But both act like the most loving after a child has killed him/herself over the torment he/she has endured.
This person accusing me of bullying that guy, needs to learn some individuality, therefore stop jumping on the gay activists bandwagon, and get his facts straight on what bullying is. For I have an equation for him and everyone else in doubt of what defines as an act of bullying. The equation is as follows:
Overcompensating Coward + Victim = Bullying


Now, anyone who knows me knows that equation doesn’t work for this, or any situation that I’m involved in. Because while that guy likes to play victim, hence one of the things that made us part ways, especially for some dimwit females’ sympathy, I however am by no means an overcompensating coward. For whatever I say on this blog, I have no problem re-iterating it to the face of the person I’m talking about should I have to. And furthermore, that guy from “Paying (Ends---My’Friend’)” knows that I have no problem saying to his face what I’ve said here, or in the post and poem.  For some of this has been said to him already. And what I didn’t get to say to him already didn’t get said to his face because I know his cowardice wouldn’t allow it to be said to his face by me. Instead, he would leave me to resort to his cowardice mode of communication, texting. OR it will just fester within me, so I wind up using any mode presented to me to vent my annoyance of his existence. Which is a natural reaction. The mistake I and others must not make is to vent that rightful annoyance in an improper place. But even if you vent it in the wrong space, it is not the unnatural action of bullying. It is instead just plain rudeness, and I have already owned up to that lapse in my judgment. In any case, as with any equation, if one part of the equation is non-existent, then it’s not the answer you’re looking for. Therefore, since I’m not an overcompensating coward, no bullying took place.


The existence of the guy I wrote the comment about made himself the dark disappointing, worthless cloud within those past 12 months of my life. Worthless to the point that if I could go back in time, and not give him the time of day, like I did the night we met, I seriously doubt it would trigger a butterfly effect. It’s sad and may seem cruel to say, but it is without a doubt TRUE.
But with the things that lead me to that sad true statement, my question to the person who accused me of bullying is this:
Were you the one being spoken to in a rude tone on the phone, because this guy was hanging out at a bar on the verge of getting wasted again?
Were you the one repeatedly getting apologized to and accepting that overload of apologies the day after this alcoholic’s tirade?
Were you the one who was asked to put the integrity of your blog on the line after this guy once again in a drunken state being the alcoholic that he was, got up in a bouncer’s face yelling “Ha” for defending a friend of his who may or may not have in the past done something out of line while in a drunken state just like this guy has done with me?
With the answers to ALL of these questions being “No”, the person who accused me of bullying is making himself into nothing more than a follower of the moronic gay activists overusing the word “bullying”. Thereby showing himself to be a bigger fool by joining those foolish activists in crying “wolf”. Because as I’ve said before, the follower of a fool is a bigger fool than the original.