My favorite non-interactive vibrating sex toy, actually combination, for penile stimulation of the glans and shaft has always been a Magic Wand Rechargeable with a Hummingbird attachment. So much so that it is also featured in one of my XTube videos. But sometimes one would like something smaller and quieter for such stimulation. With that said, I was glad to see when Fun Factory introduced The Manta. 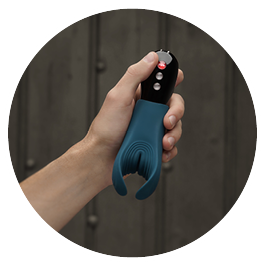 The one thing one could easily conclude, and be right to do so, would be that the Manta is not as strong as The Magic Wand. Of course, you would be correct. Because the bigger the toy, the much higher probability of the bigger the motor. However, that doesn't mean that bigger is better.

With me being unlike most known sex toy reviewers, I do occasionally make videos to demonstrate the sex toy. Luckily for you, this is one of those times. And you'll notice that I don't keep the Manta in the standard perceived direction of being under the shaft. I turn it around to switch up the stimulation, and lessen the boredom.

I hope you'll try the same when you get yours. Because I definitely recommend the Manta.


Fun with a Playing Manta powered by XTube
Posted by LeNair Xavier at 12:29 PM