What's In My Sex Party/Backroom Pouch?

If you've ever seen me at either a sex party, or bar event with a backroom, then you may have noticed me wearing a pouch on my belt, or one gartered around my right thigh. If so, you might have wondered what's inside that pouch. Well, if you've been either my playmate, or a voyeur watching closely, then you already know the answer....

It's mainly condoms and lube.

With such being the case, and me coming well-prepared (therefore supplied), you would think that I would be the 1st to offer lube, and/or a condom. Well, as much as I try to spread messages leading to great sexual health, guys making a request for condoms and/or lube can go fend for themselves. There are a number of instances leading up to this position on the matter, but hindsight on one in particular is what led the charge.

Some years ago, I was go-go dancing at a Daniel Nardicio party. I witnessed the usual greeting amongst the go-go boys between both, those who did and those who did not know each other. All of them were either white or light-skinned Latino. No matter how shy the other seemed, someone made the 1st move to either greet or introduce themselves to somebody. To every somebody except for me, the only Black go-go boy.

Later on in the night, this muscled up blond and a brown-haired twink were hooking up in the changing area. The blond asked, "Anybody got a condom?"

Being the enabler of everyone practicing safer sex that I was back then, I went into my bag and got him one. I was not turned on by the sex at all. After all, what was there to be turned on by? It was 2 dismissive white boys fucking, while I'm a self-assured Black man whose was then (and now) aware that their dismissiveness of just my presence was a product of their own insecurity. You can look at many a gay porn to see that via its producers and performers. But at the moment, I took pride in helping them have safer sex, and let that override all else.

However, as time went on, and hindsight being 20/20, I realized that I wasted a condom on walking waste products. So I needed to rethink my credo of being Mr. Helpful.

For what they did is no different than what most twinky to muscular white boys, light Latinos, and buffed, big dicked black guys, (in short, porn's idea of beautiful) do all the time at sex parties and backrooms to this very day. They come to the space, even if there are condoms and lube available in the space for them to grab themselves, looking to who is considered "undesirable" to provide them with those condoms and lube. Because as far as they're concerned, the "undesirables" can't get any sex themselves, and desperately need to live vicariously through them, so those "undesirables" will provide whatever the "pretty people" need to fuck.

So while it's more about quality not quantity, what I take umbrage with is that in these guys' racist eyes, I was seen as one of those "undesirables". "Undesirable" to the point that not only was I deemed un-fuckable, but even worse, unworthy of acknowledging my presence in the vernacular of being work colleagues for that night. The asking for a condom and willfully grabbing it from me of all people showed these white boys to be no better than the black bums I see on the street. Black bums who when they had some money, would always ask me if I was Black American because they thought I was foreign-born, but now that they have nothing, and want some of what I have, I've suddenly become "Brother".

So after enduring so many instances like this, and ending up often getting condoms and samples of lube, I bring my own tools now. And those tools are only for me and my playmate. 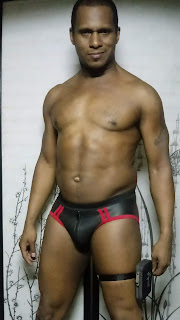 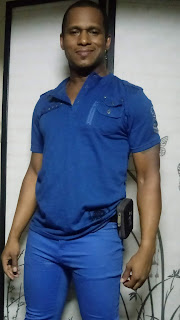 I started putting them in such a pouch because I didn't want to be those guys I mentioned before, whose type are still too aplenty today. I didn't want to be one of those guys relying on others who I think are less attractive to do for me what I, as a real man, should be doing for myself. All because I think "I'm pretty, so they should serve me". That's how I would roll if I believed some of the hype about me. So it is how I could roll. However, it's not how anyone should roll.

Now, if the guy is not my potential playmate, he has 1 of 4 choices standing near me:
That's why I take that pouch with me every time I know I'm going to a sex party, or somewhere with a backroom. Because if I ever forget, those options will then become my options. And I did have one instance in which I was faced with that. To prove again that I practice what I preach, let me reveal that I chose Choice 2. And sometimes, even with my pouch on me, I've done Choice 4 because I was so into the guy. But since I stand firm in my anti-poppers stance, I do eventually stop, and get the lube.

So as most everything  has a backstory, a simple pouch attached to me at sex parties and backrooms is no different. So if and when you see it, you know what it is, what's in it, what sparked its getting there, and what you have to be to me in order to partake of it.😉