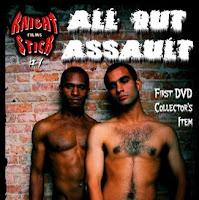 So let's start with how the pic to the right is not the DVD's cover. It almost was though. For the director posted pics of every sexual pairing from the movie in a cover pic for his followers to vote on. This pic of me and my scene partner Taino was in 1st place until the cover with Mario Ortiz and Mike Dreyden was posted. Analyzing how that came about might be something else to save for the autobiography. So moving on with today...

After signing the contracts to do "All Out Assault", me and Taino exchanged phone numbers so we could talk about each other's sexual likes and dislikes so our scene would flow more smoothly. He called me the next day while I was on my lunch break from working as a mail clerk at Kenyon & Kenyon. A lunch break during which I was shopping at the (no more) clothing store Daffy's. So yes, I was walking through Daffy's near the walls to avoid customers from hearing me talk about liking to suck dick, talk dirty, and be spanked (among other things) while fucking. 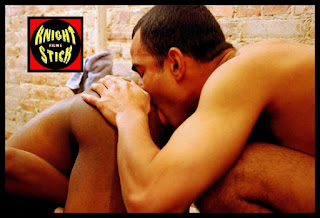 We also discussed Taino not liking to eat ass. I informed him that I overheard that in a conversation he had with the director the night we signed our contracts. So imagine my shock when Taino rimmed my ass like it was pair of chocolate smash-cakes for adults.


That's one behind the scenes tale for you. Here's another part that I've talked about before, but from here on out, I'll save the details for my autobiography --- The scene almost ended up having me as the top and Taino as the bottom. Enjoy.

Posted by LeNair Xavier at 7:55 PM