Who Is My Message of Resistance at The Pleasure Chest For? 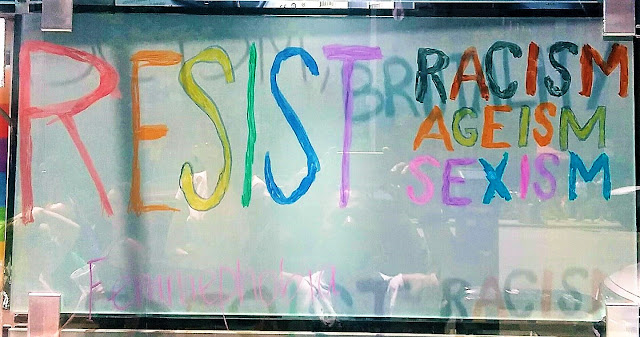 NYC's Gay Pride was yesterday. I spent the day working with The Pleasure Chest as part of their street team. Handing out paint paddles, fans, condoms, and buttons.

Before that, we wrote names of LGBTQ inspirations and messages of resistance. I chose to do a message of resistance, much like the one I did on the window of the Upper East Side location. 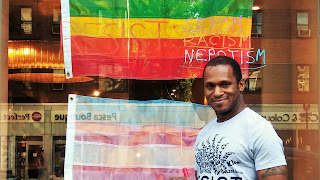 I'm sure most names of inspirations and messages of resistance will at the most cause a fellow member of the LGBT community to in some way scream "YAAASSS!", with little chance of an anti-LGBT pedestrian even looking up to see the message to put them on notice. And such a more out gay presence near the West Village location, I chose to write the message:

It is a message that might not only make a fellow member of the LGBT community scream the aforementioned, but more so stop them in their tracks and make them see a mirror. A mirror they might not want to look in.

For that look at themselves might show how supporters of this country's present shit-show of a presidential administration are not the only ones exhibiting behaviors that need messages of resistance. Sad to say, but members of the LGBT community itself are also culprits.

If you don't think so, then please read on...

RACISM Almost every LGBT hero and/or sex symbol we are bombarded with is white. Or they are a light person of color that gay media uses to claim they are not racist when in fact they are. Even though there are plenty of medium to dark people of color who have accomplished just as great (or better) a feat, or been just as great (or even stronger) a voice.

As I have stated in the past, Queerty and  Instinct is such a perpetrator of this, and has gotten so cowardly in facing those who follow my lead in calling them out on it, they both have blocked me from commenting.

Also, most recently, the racial insensitivity to Philadelphia's unveiling of a gay flag including the colors of black and brown makes those white and assimilating people of color who claim to be anti-Trump to be the biggest of hypocrites. Ones whose souls are at a level of disgust that there are no words to describe how deplorable they make their existence. This is not to say that I didn't have my own feelings about it, but it was nothing compared to the racial insensitivity and selling out that I saw online from our own.

Also, why is it that when a model call is put out that as good as I and others 30+ have maintained themselves, we are denied the gig simply because of our age. Yet some of us have the looks, stamina, and discipline to get the job done better than the white/light 20-somethings hired?

Case in point with an example that compounds both ageism and racism.- There have been many nights when I've go-go danced in my 40s, and didn't stop dancing for 1.5 - 2 hours after I started. Meanwhile, many of these young white go-go boys today act so entitled that they get on the dancing box for 5 - 10 minutes, and then they disappear, and are hired again.

SEXISM The sexism in the LGBT community is also out of control. For there is no excuse for a female to be questioned about her presence in a male-dominated gay bar when she is with her gay best friend. Or when she is being so civilized, you wouldn't notice her unless you stood next to her, and/or she politely said "Hello". Yet, there are many gay males who get their knickers in a ball-crunching twist when she is civilized.  I know many females come in with their overcompensating flamboyant male friends. But let the female show themselves before judging them. The same way you don't want to be judge based on the behavior of a few bad seed gay males in our community.

This sexism also translates into transphobia. The kind of transphobia that makes transgender people not tell you they are transgender until after the fact. Such as the instance I spoke of in my Thotyssey post, "X-Ray Sex: The Transgender Surprise".


So you see, the message of resistance is not only necessary to be addressed to the racism, sexual assaults, misogyny, and narcissism that presently runs our country. It also needs to be addressed to ourselves. And it's a reason why there are gays considering strapping themselves into some form of a "Conversion Therapy Horror Chair".
Posted by LeNair Xavier at 1:03 PM