Many gay males are first introduced to poppers when they bottom, and some top urges them to use poppers as an aid to make the bottom loosen up their buttholes. The main reasons for this is because:

If none of these are at play, then that user of poppers is using them out of addiction. An addiction that might have started out of one or more of the aforementioned reasons. So if you fit in that criteria, reading on is still very much advised. For if you take note of the source of your present harm, you can begin stopping yourself from doing further harm.

Many gay males still believe poppers aid them in bottoming. And more and more it seems, they have passed this idea on to their straight female friends. So this is a post of extreme concern. For as I have said numerous times before, poppers are a chemical. A chemical that if you were to drink that bottle instead of huff from it, you would wind up either extremely sick, or dead. And while you think huffing on it does no harm because no reports have come out to tell you otherwise, there's a simple reason for that.

The reason agencies and sex shops aren't more vigilant in telling you the truth of what poppers are doing to your body is because they're money-makers. The problem is that they are money makers at the expense of your health. All because you believed a lie.

These agencies won't tell you otherwise because most of them are anti-gay. Therefore, poppers are a money-maker to further their agenda of making us seem like our "lifestyle" makes us more prone to substance abuse than their "straight" "Christian" selves. And poppers (or whatever name they call them to conceal the self-destructive and illegal use they're catering to) being sold by a sex shop is bad for poppers work to the detriment of your sexual health, not the bettering of it.

This is not to say that I have never had a sexual encounter that made me consider using poppers. However, my initial attempts at using them resulted in me still feeling the pain poppers were to supposedly avoid. So with my being a substance experimenter, but not an abuser, as well as being aware of the stigma of how being gay and being a substance abuser go hand in hand, I was determined to enjoy a cock chemically-free. So my Aries stubbornness and determination kicked in. Making me find a way to enjoy the feeling of a dick inside me. Without any harmful chemicals entering my body, then altering my mind. which would in turn make me not experience to the fullest the natural high that comes from a skilled top's dick sliding back and forth and throbbing in my ass tunnel. 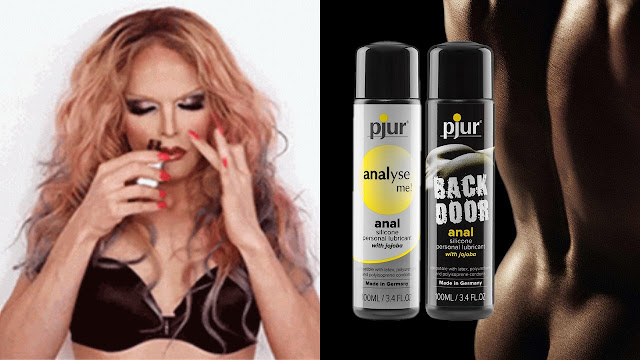 With that goal, I realized that all you need is a good lube, desire, and relaxing oneself naturally to take in a cock. For I have been with guys who are thin to beer-can thick, short and long in length, as well as being in 1-on-1, tag teamed, gangbanged, and even once double penetrated. And even my most challenging of those sexual encounters were void of poppers. 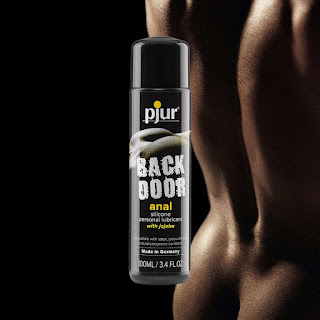 My 1st experimentation with Pjur Back Door was not on myself actually. It was on a fuck-buddy. He normally topped me. One day, he messaged me for a hook-up while I was at work. So I told him I would not be able to clean myself out like I normally would. I guess he wanted to play with me so much that he offered to bottom for me. I figured the tight hole of a guy who usually tops is the perfect guinea pig to see if Pjur Back Door really works.

I got to my fuck-buddy's place. After foreplay, he got on all fours making his nice ass available to me. I put some Pjur Back Door on him, and I slid right into him.

Then I had a hook-up where I tried it on myself. It turned out that the guy I hooked up with also used Pjur Back Door. He was my height, had a huge cock, but he fucked my ass harder than anyone I can recall. Totally dominating me. Yet, even during his initial entry into my ass, I felt no pain. I LOVED every second of it. Likely because the minute or so that it takes for the jojoba oil to do its job had already started by the time he entered me.

Jojoba oil doesn't smell like flowers, fruit, or candy. Nor does it smell like shit. However, because it makes the silicone lube have any scent at all, it will make those uneducated about jojoba oil think you have an accident to take care of, Even though you actually don't.

I first discovered this at my first attendance of an interracial sex party called Swirl. A couple of guys tried fooling around with me. They toyed with my hole. Realized I was already lubed up. Smelled their fingers, then left me alone. Knowing that I was beyond clean for this party, I put the pieces together, and realized that the light scent of the jojoba oil in the lube is what was making them take a step back.

With this new information, please do a service to yourself and others. To yourself, stop believing the lie that poppers help you to bottom.

As a further service to yourself and others (such as sex shop customer assistants), stop putting yourself in the line of fire. For when you buy them in a sex shop, calling them "poppers" shows illegal intent. So you never know when a dutiful police officer might stop by. Enforcing whatever punishment they are permitted to give when they witness you asking for poppers by that term, and to the sex shop staffer directing you away from the word "poppers". For the only reason in this day and age for them to be sold in a sex shop is illegal.

It's the lube that I used in my video "Poppers,... We Don't Need No Stinkin' Poppers!" So I'll leave you with this sight, and your consideration of what I've said here.

Posted by LeNair Xavier at 8:30 AM