Why are so many gay males single?

It is a question often asked, but no one seems to have a real concrete answer. And if they do come up with one, they often do the talk, but not the walk. Well, while I am not perfect, I plan on letting this post show that what I say here comes from being both the wronged, as well as the wrong-doer. So I have learned my lesson. And by the end of this post, you'll learn how we can discuss this further in person.

Whether you meet a guy in a bar/club, at a sex party or backroom, or via an online hook-up it has become a norm that we have come to accept and display behavior to one another that says:

"I got horny, hit you up online (or left the bar/club with you), fucked, and never thought that for one second I owed you the courtesy of treating you like anything more than a hole to stick my dick in and/or a stick to tickle the nerve endings in my ass tunnel with. So excuse me for acting like that moment and night never happened, and/or not remembering your name. It's because in short, you weren't human to me. You were an expendable object simply there to satisfy my horniness. And I used you because I got sick and fuckin' tired of using my hand and sex toys. And for some unforeseen reason, you just happened to be a hole or stick that came with a pulse."

And hook-up websites and apps have only exasperated this problem. For they take away the face-to-face human interaction once required for a hook-up, which made us more human, therefore less often seen as expendable. Also, many gay males lessen their manhood by saying things like a guy named Douglas said to me,"Hey, it's a hook-up site. You take it too literally and too personally. It is what is and will always be just that. It's not the Love Connection with Chuck Woolery."

Keep in mind that Douglas is a minister-in-training. So with an attitude like that to exonerate himself from being dismissive of one's time, body, and emotions in a hook-up, only a fool would go to his ministry. For his statement is waaaay less embodying of those of a man worth being called a "minister". But I digress.

Anyway, just because the idea of dismissing the person as existing after doing the deed is considered "protocol", that doesn't make it right.

(If you think it does, come to my discussion on 1/23/15 and I'll give you an indisputable example to solidify this point.)

Now, I'm not saying that after a hook-up that you have to date, then call a realtor, because you're immediately a couple. What I am saying is that from the moment that guy either clicks on your online profile, approaches you at a sex party, touches you in a backroom, lust for you in a bar/club, or so much as kisses you in any of the aforementioned places, it is your God-ordained right to demand that he remembers the fact that first and foremost, YOU ARE A HUMAN BEING. So after sex, he should not be allowed to treat a Fleshlight or Tenga Flip-Hole with more respect than he treats you.

And if it's not those instances that gay males are using as a means to treat one another as expendable. It's circumstances like color/ethnicity, age, and even HIV status.

I've went over color/ethnicity enough times that I don't have to go there in great detail right now. If you're new to this blog, you can easily click on one of the links under "Category", and you can easily find stories to support how we are ostracizing each other for no good reason.

The same can also be said regarding HIV status as a means to treat one another as disposable. I also went over this in great detail in the blog post, "The 'Are You Clean?' Challenge".

What many gays don't seem to realize is that all of this ostracizing makes for bad Karma. Bad Karma punishing us for that dehumanizing treatment, which in turn makes many gay males end up alone. And Karma being the tricky bitch that she is will get you. For even after you think you've found the "love of your life", Karma makes you pay by taking that love away. It's payback for however many times you didn't show simple human courtesy to a person you shared your body with.

There is always that parent, family member, former friend, or job that distances themselves from us after we come out. However, that cannot be used as an excuse as to why so many gay males do it to each other, then end up alone and lonely in our old age. We have to start breaking the cycle of belittling.

And it won't stop until we address how it exist, and act humanely to one another to counter it. Hence why I will be continuing this in a discussion I'm moderating on January 23rd at the LGBT Center in NYC. There I will give more details to my stories, and give you the floor to tell some of your own. So until then.... 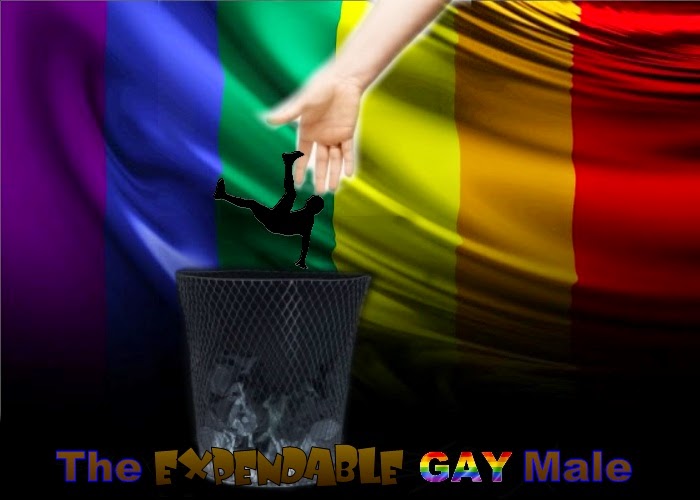