Every sex toy reviewer has a process as to how they go about reviewing a sex toy. Some do it solo. Some do it with a partner, which works best when the toy is marketed to and can only be used effectively for review purposes by a couple. However, since most sex toys are made for masturbation and foreplay, reviewing a sex toy alone is the best. Primarily because it eliminates focusing on a partner's pleasure, which can be a distraction if that partner is not the test subject. Reviewing it alone makes you the sole collector of the information, therefore better focused on the details to help readers and viewers of the review.

I revealed details of my review process before in a couple of posts. Namely when I reviewed the Kiiroo Titan, and most recently when reviewing We-Vibe's Vector. This gave me the idea for you readers to see if possible the exact videos I have used for my review. Hence this post from my Facebook page: 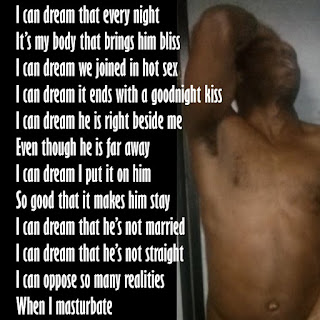 So click on the "link between the teasing gifs "Sex For Toy Testing" and see the scene those gifs are made from and more to get deeper into my sex toy review process. You'll see what along with the sex toy contributed to my orgasm.

Sex For Toy Testing
Posted by LeNair Xavier at 10:05 PM