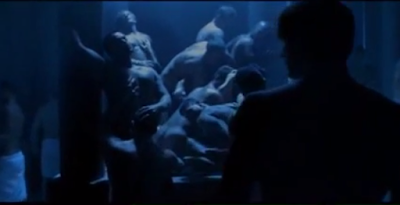 I have made it no secret that I go to sex parties partly to have fun, and also to study sexual behavior. Hence why this section of this blog is so often read and respected. However, there are some guys who are so bad in their social skills that they have no other choice, but a sex party. Well, I had 2 instances in the course of 1 night that brought addressing this matter to this boiling point.

The party was at The Rainbow Playground, which is a party space in Queens that I actually like a lot, and feel many of the Manhattanites whose pretentiousness makes them want to keep their sex party play to a train ride distance within Manhattan only, would find to like the space as well. For it has in addition to an open area, it also has numerous little rooms to play in. Thereby eliminating the unwanted attention of socially inept, overly aggressive, desperate party-goers.

However, once you leave those private areas, you are exposed to the socially inept. Like those that inspired previous and future posts, and the 2 inspiring this post.

The first incident inspiring this post didn't happen during the following hot session, but after.

I hooked up with a hot, shorter Asian guy. It was in the open area, but so many patrons were paying attention to the playtime of 2 Whites guys that we had the space to ourselves for the most part. He topped me in missionary, I loved feeling his smooth skin get wetter and wetter from thrusting into me. After he came, he was attentive enough to ask me if I wanted to come. But I told him the truth, which is that when I bottom, I'm satisfied knowing that my ass satisfied my top. So afterwards, I went to do my usual post-playtime wash. And not in the bathroom. For another great part about the Rainbow Playground is that along with 2 bathrooms, it also has a wash area that actually has a sprinkling hose.

While I was washing off, this husky (maybe fat) tattooed possibly red-headed, lightly bearded White guy comes into the area. He then proceeds to take a piece of paper towel,and wipes himself off like I wasn't even there with the water running rinsing myself off. I calmed my nerves before speaking, because I didn't want to cause a scene I had every right to cause by cursing him out. So once I collected myself, I said, "Excuse me. But I would like to be alone."

Then he goes and stands near the curtain that's there for privacy...with half of his wide ass outside the curtain, and the other half still where I could see him watching me. Witnessing this I made my tone more stern and said, "I still didn't ask for an audience!"

So like a poorly trained, spoiled brat that's finally been put in his place, he reluctantly took himself just outside the curtain.

The 2nd incident was a very brief stint in one of the small rooms. Me and this short Latino walk in, and it turns out being pitch black. In such an instance, if there's no where else to go, I would have still kept my skills in pleasing my partner in check. Well, this little shithead calls himself putting lube on my ass, and instead of touching me to find my hole in that darkness, then apply it generously, ...he just slaps the lube on me. Leaving this feeling of a blob against my butt. He tried putting his cock in me after, and I just said, "NO!", pushed him aside, then proceeded to walk out to clean off the mess he haphazardly made on my body.

A friend of mine has said that the concept of "The Great Latin lover" is a myth. He has found them to be extremely self-serving and overcompensating with their machismo. More so than males of some other cultures. Now while I have had a high number of great sexual experiences with Latinos that you may have read about, I must admit that me having similar experiences like that of my friend is why there haven't been more. This little shithead's move is a prime example of that negative generalization coming to fruition and lowering the number. He was so busy trying to get lube to make an easy glide for his dick, he never took the care to apply the lube in a way to be comfortable for me. In short, another selfish fucktard.

In fact, both of the aforementioned instances were acts done out of selfishness. And such selfishness is a behavior that when it leads to a lonely single life, like these guys probably have, one can take solace in calling that lonely single life, "JUSTICE". What is more disgusting is how both of these guys were around my age (44), which means they probably have been doing selfish acts like these for God knows how long, and still haven't fuckin' learned!

Such senses of entitlement,  lack of manners, and poor skill is why such people are single, and NEED a sex party. For anyone tolerating these behaviors  are putting themselves in the position of having to pick up where these guys' (immediate and/or gay community) parents fucked up. And no one wants a life with that. Hence why if they are in a relationship, then it's an open one that is unhealthy. Unhealthy, because for such incompetence in their social skills, their "partner" likes the "relationship" open as a means to have the constant option of getting the fuck away from him!

However, if their partner is tolerating this behavior even to that capacity, then he's not too right in the head either. So him and his poorly socially-skilled partner might as well be monogamous. Because no one in their right mind should want either of them, even for a minute.

Whatever the case, my ongoing learning through sex parties shows me another reality of behavior that crossover into ones daily life. Behavior that needs correcting before it damns you to a life of justified loneliness.
Posted by LeNair Xavier at 1:08 PM