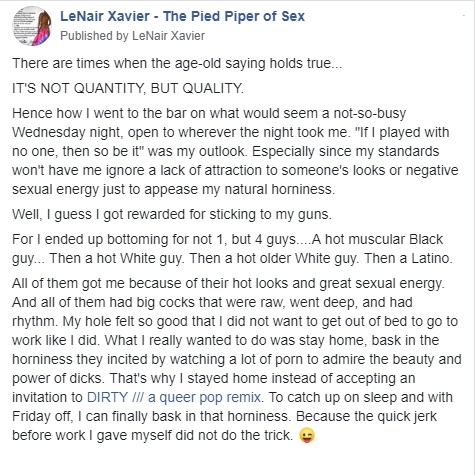 After riding the Latino's beautiful cock, we parted ways. I then went and sat on a stool at the bar. Not too long after though, I could see from there that a go-go boy was trying to give the Latino a lap dance. The lap dance might have even led to some fucking over there. But it was definitely the case in an area behind a curtain closer to the bar, as I went for a closer look.

Trust me, my need to go in closer was not jealousy of any kind. My need to investigate was because I suspected a trend. The trend I stated in the caption of the Instagram pic below:


Over the past few months, I have had not 1, not 2, but 3 instances when I'm bottoming with a hottie in a #gaybar backroom, and the #gogoboy witnessing it needs to be next. Since my verbal and physical reactions were the most noticeable parts of the encounter, it was literally my #ass that sold those #gogoboys on straying from their job to try getting a taste of what I was enjoying. And for Gogo #1, that's continued straying. And you probably thought only #bottoming #gaypornstars could sell you on a top's #cock. A blog post on "L's X-Ray Vision" will soon give more details. * #gaynightlife #backroom #jealousy #envy #sexualwhiteentitlement #racisminthegaycommunity #sexualracism
A post shared by LeNair Xavier (@lenairxavier71) on Feb 28, 2019 at 7:53pm PST

So this was the 3 time such a thing has happened in the past 4 or 5 months. It's common for fellow patrons in a sex party/backroom to scramble to be the next one to ride on the dick that just pleased you because your ass pleased him. But it's another social disorder present when that many go-go boys do the same thing in such a span of time.

What's wrong is that their behavior reaffirms my observations from over 7 years ago. About how today's go-go boys don't stick to being solely eye candy. And while most go-go boys are millennials, many let their horniness be governed by the narcissism and sense of entitlement numerous articles have shown that millennials have come to be known for. A work ethic is not as much in their performance as it should be, or as they might claim it is.

I'm sure this next suspicion is going to cause some of you to say, "Oh, here he goes with that again!", But the fact is many white and light-complexioned males have long tried to either be the "next and better" sex partner, or out right steal a playmate from a person of color. Yes, they play the same game with other white/light complexioned people. However, every medium to dark complexioned Black, Latino, or Middle Easterner, and Asian reading this has probably experienced this at some point, and a good deal more often.

Case in point:
At the after party that inspired my Thotyssey article, "Fetch My Drugs, Fetch My Fuck", I was the sole Black guy invited. Always having a White/light Latino playmate. When one guest would start playing with someone who came as part of a pair or grouping, all of the members of that initial pair or grouping was always added to being played with, but they were all either white or light skinned Latino. But when one of the guest tried playing with the guy my +1 (since I was the one initially invited), they tried acting like I wasn't even in the room.

Luckily, it never erupted into a conflict because the playmates I brought there were loyal enough to me to not leave me out, and tried including me when the white/light guy wouldn't bother. Looking back, I wonder does that have to do with them being European. Because I have not had such a high percentage of loyalty from American white males. But that's another topic.

My point is that all of these go-go boys are either white American or Latino. So it's only natural that they would be suspected of that same self-serving mindset. Especially by being a go-go boy, many looked upon as sex gods, and they know it.

If this is not the case with all 3, it is definitely the case with Go-go Boy #1. For while I was bottoming for the guy he wanted, he was actually trying to chat away with my top to get him away from me. This just goes to show that you can give a white boy (even one with a big dick) a gig that portrays him as a sex god, but he can still exhibit the racist white male insecurity towards a Black male's sexuality.

For no man is a sex god, whatever color he may be. And no matter what media hype tells us, the deepest part of our conscience knows that limitation to be true.

It is definitely an ego boost to realize that the way I fuck, in this case, as a bottom, that I can make even the guys portrayed as sex gods want the playmate that I had obtained. And it may be a degree of envy involved. For those go-go boys' trysts after mine came more so from them dancing on that box. A perch for them to be noticed. Meanwhile, my trysts with those playmates came simply from me being in the room... at floor level like my playmates. Knowing recognition is a possibility, but not seeking it when they approached me. 😁😎😉😘
Posted by LeNair Xavier at 3:49 PM