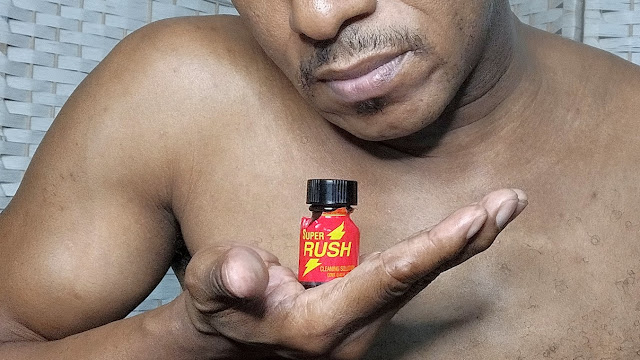 Imagine coming into work one day and finding a bottle of poppers in your locker.  Some reading this are thinking, "Whoo hoo!"

Now, imagine being me. Someone who everyone in your workplace knows is very much against poppers. So if you were me, you would be pretty pissed, wouldn't you?

Well, that was me the day I came to work and found a bottle of Super Rush sitting in my locker at the sex shop I work at. I didn't throw a fit. I felt I would get a logical explanation soon enough, and I did. A co-worker later told me that a vendor sent some samples or different brands and that was the one he put in my locker. The co-worker even offered to take it off my hands if I wanted them to. I decided to keep it simply for photographic purposes if/when I write another article against poppers. Instead, as a couple of days went by, another idea of what to do with that bottle of poppers came to mind.

With hindsight being 20/20, while the knowledge of poppers being a harmful chemical still prevail as a huge deterrent from me partaking of them, I have come to realize that part of my disdain is also how poppers were introduced to me. They were shoved in my face during a tryst by a top unwilling to take his time with my hole that is tight as one's hole should be.

I italicized dependency for a reason. For what else would you call it when a bottom misplaces their poppers at a sex party or backroom, and they scramble like a crazy person looking for them. Almost in the same way a heroin addict psychotically scrambles for their misplaced drugs. Almost every gay male reading this has seen it. Maybe even during a tryst in their own home. It is not a sexy sight at all. I have become less invested in many playmates that used poppers because of such actions.

In my experimentation with various substances like cocaine, ecstasy, crystal meth, and even marijuana (when it was illegal here in New York), my goal has always been to find an answer to...WHAT'S THE DRAW? Then if I find that answer, my next question becomes: WHAT'S THE PAYOFF?

With all of those previous experiments, I definitely found the draw. It is the long-term payoff that has led me to not partake of those substances on a more regular basis. For most of the substances I mentioned lead to a limp dick and/or your sex partner(s) not being the primary and/or sole source of your excitement, pleasure, and orgasm. So what did my experiment with poppers prove?

So trust me, being able to have this experience did let me get a chance to learn the draw to poppers on my own time, and on my own turf. Without the coercion of a stereotypical, selfish, no-brained, no patience-having douche of a top.

Because compared to the pleasure I felt using the poppers in solo play, the use while with a playmate made me take time away from my playmate. That made me feel like a lousy lover. So obtaining a high from poppers took away from the pleasure I should have felt with my sex partner. It also put me on the verge of lessening my ability to accurately grade my sex partner's performance. So I never experimented using poppers while having any kind of intercourse again.

I would like to say that the new information I found through experimentation and an article from Popper-Aromas.eu made me do a complete turnaround on the issue of poppers. However, such is not the case.

It is because people have repeatedly shown themselves to be followers of using things that can serve a good purpose, but someone comes up with a counterproductive purpose, then people join the bandwagon and make that the main use instead. Poppers are one of those things. So while there are sometimes health benefits with using poppers, you can't trust the sight of poppers when you know an overwhelming majority are using them simply to get high because they have allowed intercourse alone to not enough of a high for them.

With all that said, am I as against poppers as much as I was before? No. I might even partake of them myself in the same frequency I partake of marijuana, which is not much at all. However, I will still keep the previous articles I've written about poppers up because I would prefer to inspire people to not use them. For we are headed towards a society dependent on foreign substances, instead of the natural ones between the bodies in order to get through a sexual encounter. And that needs to stop.