There have been many guys that I've hooked up with at sex parties and backrooms with whom the sex was so epic that when I discovered they had an OnlyFans, JustForFans, or the like that I was ready to share our sexual chemistry with the world. Not out of a desperation for validation. Just simply to celebrate our exhibitionist spirits. However, no such video has transpired since the advent of such fansites. Because when I get a look from the clips on their Twitter or try a discounted subscription, I often end up disappointed.

For what I wind up seeing is the guy I was in such lust with displaying a desperation for validation by looking into the camera. Once I see that, I scrap any plans to suggest an on-camera hook-up. If we ever fuck again, it is simply by the same chance encounters we initially met. Sex parties and bar backrooms.

If your hole is pleasing a guy's cock, or if your 6", 7", 8" or more inches of dick is in one's mouth, ass, or pussy, that person has no business looking into the eye of one of a smartphone's cameras to get the approval of some socially inept voyeurs. Making sure to get the right angle so some unseen voyeur shows approval via a subscription the following month. For besides it being disrespectful to their sex partner(s), it also doesn't speak well of how much respect you have for yourself.

Countering this rabid narcissism is why I wrote "PRIORITIZE". And I know from what I speak. Because to those who might recall my homemade videos featuring a playmate (when XTube was functioning), NONE of those videos showed me looking into the camera. Me and my playmate turned on the camera, and did whatever position in whatever angle suited us. Never looking at the camera. For the sex we were having was just like a post from my shadow-banned Instagram that says - "...Me and my playmate(s) got in the mood to fuck, and you just happened to be there." The camera was just a prop in the back of our minds It was not the target audience.

Proof of this is in one such video I saved and uploaded to my OnlyFans.

In any case, we need to get back to those days.

The folks at Kiiroo were kind enough to give me, not 1, but 2 of their latest FeelMe strokers to test. One of Leigh Raven and the other of September Reign.

There really is no contest between these 2 sleeves. They both offer amazing pleasure, but by different means. 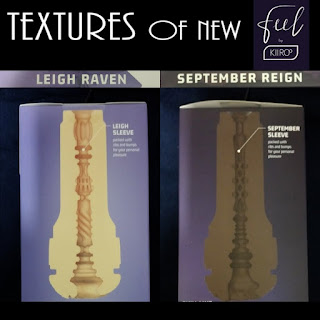 For as seen in the above photo, both contain textures that are hits within male strokers. Such as the twists and rings in the Leigh Raven FeelMe stroker. Making it focus more on spots of widening and thinning within the sleeve's plus subtle textures.

Meanwhile, you can see that the sleeve of the September Reign FeelMe stroker focuses more heavily on varying textures. Textures that are also hits within the male strokers. Such as in addition to the all-time favorite ring texture, there is also a section within the sleeve of a netted texture.

The differences in widening and textures are more so felt on the head of the penis on longer strokes. Be they done by the Keon or by the user's hand. Regardless of how you use it, while all bodies are different, I doubt that you will be disappointed with the outcome. 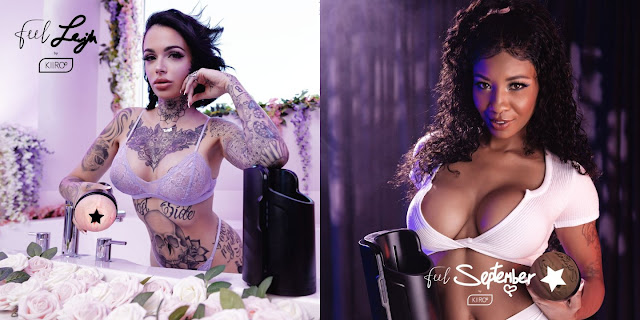 With that said, I most definitely recommend either or both of these strokers. Get just one because the differences described, or both to change up sensations when using a Kiiroo Keon or manual use.

Whatever you decide, enjoy it. Because as I always say, YOUR BODY, YOUR CALL. 👍😊