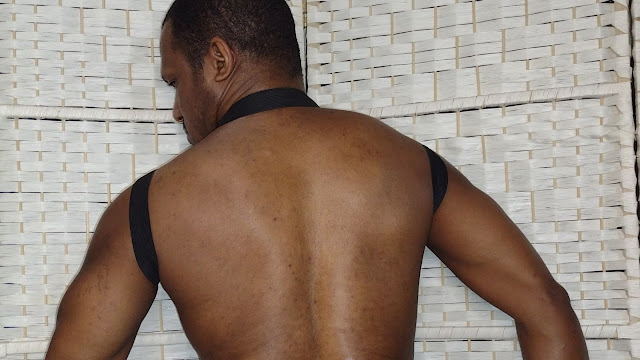 I knew when sex parties started coming back as the pandemic got under some degree of control that a level of social ineptitude would expose itself. I foresaw it enough to write an article about it for Thotyssey's "X-Rayed Sex".  Also being single and sexual, once sex parties returned, so would I. So I have been to Scum and Milk Chocolate NYC parties. However, I did not expect to see behavior at both parties so far that would make me feel the need to post this on my Instagram:

Recent ventures have been plucking at my last nerve. For it seemed at a recent of SCUM's Gush party that patrons had no concept of doing their own thing. I couldn't even fuck a guy in the sling without 3 - 5 older white and Latin guys coming in the middle of it. Putting their faces and hands in places that totally interrupted the flow of the sex. It was just a night in which were so void of social skills that they all felt the need to horn in on someone else's play time, instead of finding their own.

In the case of this one 20-something trash heap that happened to be Latino, he felt the need to horn in with the intent to flat out steal my playmate. Well, by further interaction, I realized the white guy he horned in on my time with was actually high as fuck, so there was no real loss there. So the white guy did me a favor substituting me with the trash heap because my 50 year-old popper-free hole was too tight compared to the trash heap's poppered-up hole. As the white guy needed a looser hole to accommodate his drug-induced inability to keep the hard-on I created.

If anyone is wondering why I am citing the color/ethnicity of those involved, I do so because their actions triggered a need for acknowledgement. Either to praise someone for doing better than the racist sexual expectation (racist sexpectation) gay media has told us to expect from one of a certain background; OR call out a behavior that is indicative of the numerous acts of sexual entitlement I have reported over the years and which color/ethnicities facets of gay entertainment has given a pass to commit it most. So this instance, it is to cite the latter.

With that said, I can give credit to most of the Black males who were present. For gym-bodied Black males (porn-endorsed as they are) tend to also be culprits of such behavior. However on this night, of the many who were there, I had such an intrusion from only one.

Perhaps this was a bad week. Because the last straw making me need to address this inability to do their own thing happened at a Milk Chocolate NYC party held at Rainbow Playground. If anyone has been to that space, then you know how it has a number of booths and rooms for privacy while you play. However, the doors are locked by a hook & eye latch like the one pictured below So many of the social retards (and there were many) will push the door open while you're playing and peep at you. When you are secure in your playing, or simply want your privacy by being in that room, it gets creepy. Making you feel as if you're being gawked at by Jack Nicholson's character in "The Shining" when he chops open the hole in the door and says, "Here's Johnny!" 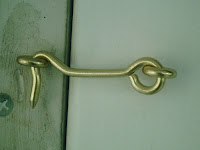 Such patron's behavior might not be as horrific, but to the sexually secure and those wanting their privacy in a space that allows it, it is just as unnerving.

The reason I point out sexually secure is because one thing this age of OnlyFans and JustForFans has exposed is the desperation for validation many gay males still have over their gay sex. The tell-tale sign is how they look into the camera often while having sex instead of focusing on their partner. Transfer that mindset to sex parties, then you have guys who need to be seen, instead of enjoying being seen by chance like a true exhibitionist. And they do it on repeat because they get no real satisfaction since they're just preaching to the choir.

Only someone seeking that validation would not be royally pissed when the intruders I speak of got to the point that it seems they toyed enough with the hook to undo the lock and open the door to the rooms in the midst of guys playing. Leading to groups of 3 - 5 guys staring at those in the room. What makes this even worse?...

While walking around the space, I saw this happening simultaneously in 2 separate rooms at opposite ends of the space.

Hence why when such intrusions upon my playtime in a room with someone happened to me, I immediately threw the 1st guy out. Thereby never letting it get to the point that unless it was in an open space that one guy became a group of 4, 5, or more guys of guys watching my entire play session. Spending all that time watching me instead of seeking fun of their own. Perhaps if they sought fun of their own, they would not be so horned up that they become intrusive to one's personal space when they approach someone. Or perhaps they would be more resilient to being rejected after approaching someone in a civilized manner.

Well, as a 5'6" Black man who finds himself in mostly diverse environments, is versatile in action, yet unlike the porn-endorsed image of what he should be with non-blacks prefers bottoming, if anyone knows rejection, it's me. But as you can see, I also know how to bounce back from it, and not be a social retard because I let the rejection beat me.

That's the message I'm trying to get through here. For this acting out because of this inability to cope, and sexual repression is what is keeping good people away from sex parties. And I'm sure some reading this will try blaming my writing this as the reason why those people stay away. Well, I know that's just passing the buck to avoid the big picture. For if I don't write it here, there will be many more who will go tell their friends and the word will spread from there. My writing this is just written confirmation to 2nd their hearsay, not incite it. Either way, it furthers it as being true. And that last part is what makes me an easy target for blame. For I'm the one you see telling the story.

With all that said, is there is an easy solution to the problem? Only if the issues that are causing these negative behaviors at sex parties is corrected from the patrons by them taking a much-needed look within. Otherwise, the promoters' hands are tied, and not in a good way.

Lastly, do note that overall, I still have fun at sex parties. These things I'm pointing out are inconveniences that stop them from being even more fun. Fun that can be stifled completely for someone who doesn't know their way around it like I have found. And that's the point. They, nor I should have to do that. So this is me serving gay males notice that we need to do better. Don't come to sexually permissive spaces until you have learned how to keep your jealousy and insecurities in check. Learn to stop yourself from imposing upon other's time. For you are ruining it for those who deserve to be there.

Qther rules of Sex Party Etiquette can be found on the more adult "L's XXX-Ray Vision".