I was standing in front of the DJ booth. In this deep dark, I felt myself being watched. So then I had to figure out by whom. It turned out being a tall, slim, dark-haired white guy at a diagonal to my right. We slowly started exchanging glances. As this continued, 2 others guys came on each side of me, closing me in, which I hate. So I moved over to stand against the wall to the right of the DJ booth, which actually put me still at a diagonal behind the guy, but a very slight one. He turned, and the exchange of glances continued. He then proceeded to stand against the wall next to me, but still not saying a word. 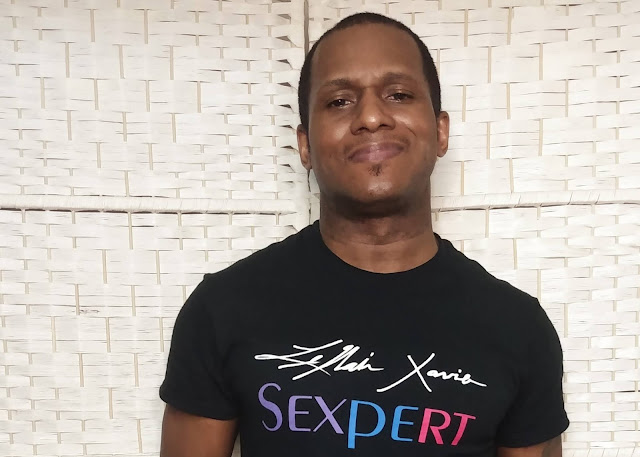 This made me think back to my playmate from "French Kiss, Big Bliss". Introducing himself to me by saying, "Either we can keep looking at each other, or one of us can say 'Hello'." So instead of us continuing to gawk at each other, even with him standing next to me against the wall, I initiated conversation by saying hello.

We exchanged names. His name was Robert. He was White American, but born in Spain. Well, whatever the case, he definitely adopted the too typical American attitude towards sexuality that I've encountered.

For during our conversation, we talked about what we do for a living. He's an actor. As for his liking what I do, he was okay with me saying that I worked in a sex shop as my day job. However, when I added that my side job is that of a sex blogger, Robert did the oldest escape line in the book by saying, "I'm going to go use the restroom." Then added to show the finality of how this was a move to escape, "It was nice talking to you."

This is not the 1st time a guy has turned tail and ran when I tell them I'm a sex blogger. It has happened enough times that as with all such blog posts, I'm forced to make it public knowledge because it is indicative of a greater problem in the American gay community. And I must say American, because that is who this has most often happened with. With European suitors, along with the initial fascination most Americans give, they've also at least allowed me to say the truth of how I practice discretion. They at least allow that much to be said. Hence why I'm still in touch with my playmates from my years old blog posts, "Sexy Sweet Swedes" and the aforementioned "French Kiss, Big Bliss".

As my most loyal readers have seen, I don't put you on blast by name unless you have wronged me.

With that I'm sure some of you are asking: How did Robert wrong me? He did so by wasting my time. For so many gay males give off this idea that since we're out and proud gays, we don't have to abide by the sexually oppressive norms of the hetero-normative. Well, if you are a gay person with an issue with talking about sex, then you're a hypocrite to that bullshit hype about all gay males. A hypocritical hype often found with American gay males. Hence why in a sexually permissive space, a visiting European is often underwhelmed. Since they are not above lowering themselves to the colorism and racism I often write about, I have found myself passed over for a white/light American. But you can see they were just settling for the optics. For they later come back around trying to get me. Due to finding the sexual energy of who they settled for disappointing.

If you want to know what exactly I write about with sexuality, then simply ASK. One can very simply ask me questions like:
2 simple questions I could very simply gave the answers to with the evidence being throughout this blog in posts telling of my sexscapades. Unfortunately, members of this Grindr generation (like Robert) are too socially inept to communicate in one-on-one conversations. So they are totally oblivious about asking any simple question(s) that can put their mind at ease on a matter.
I'm sure some of you are quick to say that not everyone wants to be written about. I am totally aware of that. Hence why with my 1st Amendment right to freedom of speech, I use discretion. However, with that discretion, if you've done nothing to be ashamed of, then you should have no problem knowing that such a tale of your sexual prowess (or lack thereof) is out there. Those who have allowed shame by activity, ethnic, religious, and workplace cultures, etc. to impose upon their pride in their sexual behavior are those most uncomfortable about such tales.

Being insightful, I can very easily surmise as to what some guy's apprehensions are. They feel my being a sex blogger means:

The problem is that all of these are based in guilt and shame about their sexual behavior. The first 3 bullet points though might very well be for no good reason. As some of that sexual behavior that guys are feeling guilt and shame over is simply them being gay. Hence those who drink to the point of drunkenness even when they don't even plan to so much as kiss a guy. They want to numb themselves to their action as a gay male.

This leads to another wrong of Robert. His alcohol consumption for liquid courage. Many, too many a gay males are okay with this. Completely ignoring the fact that using liquid courage to express any part of yourself, especially your sexual self is not a man.

And liquid courage is why Robert  tried coming back to me. Yes, you read correct. He was fooling around with someone else. I was standing nearby by paying him no mind. Then I saw a hand reach out for me, and it turned out being Robert. In response, I swatted his hand away and my inside voice made its way outside for me to say "Alcoholic faggot!"

He evidently heard me, and tried growing a pair of balls with his tone by saying, "Excuse me?!"

I leaned forward to give him a closer look in the eye and responded, "I said 'alcoholic faggot!'", and then walked away.

Don't try showing me the pair of balls that grew from being tiny seeds on you only because you poured liquid courage into them. Because I will get a sadistic joy from embarrassing you for it taking liquid courage for you to seemingly grow a pair.

I make no apologies for what I said either. For we, the American gay male community have too many "Roberts" among us. So while "faggot" might be an ugly word to use, as I said before, needing alcohol to be the sexual self you want to be is not a man. Thereby making it ugly behavior. And someone needs to call all such people out on that ugliness. The reason it took me so long to come out was because I did not want to claim I "needed" substances in my body that morph my judgment in order to be the sexual being I want to be.