There was a guy I had seen a number of times on Adam4Adam as someone who checked out my profile. I saw him again on Grindr, and tried hitting him up to no avail. Also, a few times in between those Adam4Adam and Grindr instances, I ran into him in a bar backroom where we went down on each other. With each of those backroom encounters making me think that one of those sucking sessions would lead to one of our cocks going into the other's ass.

After a long while, one night recently it finally happened. He was letting this guy go down on him, while an older guy and an Asian tried getting in the mix. I was standing on the outskirts of them all just observing. However, when this former suitor looked up and saw me, he tried pulling me into the mix. Once I got pulled in, the Asian left.

Such racist Asians hope to fit in to racist white culture by assimilating racist whites in such instances. They either try knocking a smaller black man (like myself) out of the way, or like in this instance, they leave the group action adopting a "No Blacks" attitude. All the while justifying Karma to come for them in the future. Given them the same future those racist whites will endure. One of buying companionship (with prostitutes and tricking go-go boys), instead of genuine, affectionate companionship. Because Karma is just that bitch, and I love her for it.

Anyway, as his focus on me got more intense, the other 2 guys left. I often feel bad for guys in that predicament because I've been that guy who becomes an after-thought. And I usually part ways with a guy who does others that way. This time however, the difference is that we have a history of courting and playing together, which makes a great difference to me.

I didn't know if he wanted it right there, or in the bathroom, which I knew was full of guys getting it on by that time. I soon got my answer when he led the way to the bathroom.

Besides his cock filling my ass, I also loved feeling the bare skin of his groin slap against my ass cheeks. I looked behind me to see the light make the sweat on his shoulders and chest glisten. With the sweat from his chest wetting my back more than it already was from my own sweat. And each turn back, his thrusts into me made the amount of sweat to see glistening grow.

Afterwards, he asked if I was coming back the next night, which was the underwear party. He said he was asking because he would definitely be there, but he wasn't using that revelation to pressure me into showing up. I told him there was no pressure, because I most likely would be there anyway. Unfortunately, due to the track record of many gay males, I didn't put much faith in seeing him the next night.

Well come the next night, he was there.

We greeted each other, and that was about it. At first. As the night progressed, I continued my usual routine of observing behavior. He didn't know this about me so while he was talking to a white regular. I was sitting on the side enjoying my accumulation of knowledge.

While he was talking to the regular, he looked over and saw me, then called me over. Since like I said before, he didn't know about my enjoying the art of observation, I don't know if his invitation was because he thought I was lonely, or because he really wanted me. Whatever the case, I went over thinking I would be brief, then move on. Wrong. He kept me around, which I didn't think was a good idea.

For I know the white regular he was talking to sometimes goes to play with other white guys at a black guy's house, but he himself doesn't play with black guys, With this reason in tow, I figured this was not going to be the most comfortable of groupings.

My playmate led us to the bathroom. Me and the regular made out with him one at a time. Unlike most 3-ways, for obvious reasons, a 3-way kiss never ensued this time. Eventually, the regular had enough of trying, and decided to leave. So me and my playmate picked up where we left off, and upped the ante on our playing. He undid his pants, and my anticipation of him unveiling his cock to me again made me feel like I could hear the sound of his button being pulled out through the button hole over the loud music. So as soon as I saw a slight glimpse of his dick beneath his pubes, I dropped to the floor to go down on him.

There was a guy there watching us. He never tried to intervene, but he did later try to copy us,and take credit for what we started (told in much greater detail in a 12/4/2016 Facebook post). There were others who intervened however. And because of them we stopped. We did later come back though. This time, our actions did all of the talking to say, "We know you're going to try to interrupt and crash our party, but we are going to fuck without you!"

So he put me up against the wall with me wearing for this underwear party, some thigh-high tube socks, a cut-off t-shirt, and a jockstrap. He put his hard cock in me, and I was loving his dick all over again. The socially inept tried coming in to put their hands where they shouldn't. But we were so into each other that we dismissed them, and made them have to live vicariously through another pairing, but not ours. 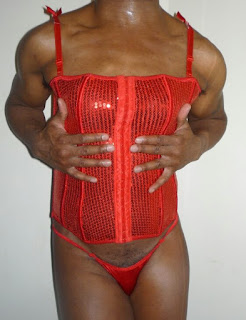 Lastly, this may have been a great sex tale, one thing I did not reveal about this hot guy throughout the entire story is the fact that he's a drag queen. I don't know if he was aware that I knew that even before our Adam4Adam and Grindr sightings of each other. And it really shouldn't make a difference, but I'm telling this tale because his behavior exceeds the expectations too many gay males have about the sexuality of drag queens.

However, this is only 1 drag queen. So what conclusion can be made about others?....

You can find out in my 2nd post for my column "X-Rayed Sex" for the Tumblr blog, Thotyssey.
Posted by LeNair Xavier at 7:05 AM