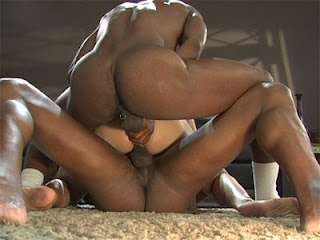 I once tried being a DP top with the Jersey boys, and I loved feeling my cock rubbing up against C's. I loved that sensation when we were only doing foreplay, but I really liked it while inside M (God rest his soul). My cock rubbing against C's thick Latin member, and the heat from inside M heating up my cock. I'm getting a hard-on just thinking back to then, and how while I liked my part as a top, I also even then wanted to be in M's position.

With that in mind, there has got to be a hot couple out there with 2 versatile guys willing to stick their hot cocks into my ass. OR 2 hot guys who might not even know each other (yet) wanting a 3some with someone willing to be double-penetrated being part of the deal.
I've had a number of people telling me that my fear of losing my rep for having a tight hole won't be lost by being double-penetrated, so I'm taking their word for it. With that in mind, I'm following the suggestion from Daniel Nardicio during my interview a few months ago on DList Radio, and putting out this A.P.B. for 2 hotties wanting to double-penetrate my willing and wanting hole.

Any takers? If you're in the NYC area, or you're a production company with 2 candidates I might be interested in, then send me an email (tre@tre-x.com) with pics attached and let's see what happens next. Maybe you'll have a tale to tell your friends with the pics or video to prove it.
Speaking of video, check out this scene from Kristen Bjorn's "Thick As Thieves". Watching this is what gave me the hard-on I needed to get my 1st porn gig of doing a live solo on ShowGuys.com.
(Sorry about the lack of sound. But is that really why you're watching?)
If you're a hottie who can help give me something like that or better, then I'm looking forward to hearing from you.
Posted by LeNair Xavier at 8:42 PM