This was quite a busy weekend for me. So busy in fact, that it's going to take about 2 posts for me to just tell you the basics of what happened.

Saturday, I went to the NY Gay Erotic Expo. I was originally going to do my new policy of boycotting people who don't use my sexual prowess when it's offered to them. That is due to the fact that this year, HX put out an ad for go-go dancers. It's something I never seen done before, and since I wasn't representing a studio this year I threw my name into the hat. Although, considering HX's not-talked-loudly-enough-about reputation for not featuring minorities of a darker complexion, I didn't expect much. Just look for yourself in the "Seen" section in the back of the magazine, and you'll see what I mean. Recently, I even met a European tourist who complained how everyone looked the same.


I did make some new contacts there. I'll start from the beginning and work my way backwards. I'll explain why at the end of it.


My last stop was by Craig Sebastian's booth. I went over there a couple of times before, and immediately considered buying one of their DVDs. The vidcaps from their DVDs made me horny as hell. And so did their models when I came back for on my last trip. When I 1st went to their booth, I noticed the guys were cute, but they were wearing their whole T-shirts. This final time around, their t-shirts became cut-offs. And seeing Taino in his just blew my mind. That's why I had to take his picture. I mean just look at that torso and that ass. YUMMY! They had a sale of "buy 1 get 1 free", so I brought 2 DVDs and got 2 free. The titles were "Around The House #2,#3,#7, and #8". And in #7, Taino fucks a fake pussy, and I jerked off that night wishing that it was my ass instead. Afterwards, I asked them where the do their production, and they told me New Jersey. So I gave them a 4 x 6 card I made up with my photo and info on it. Being that I am now a Jersey boy myself, should they contact me, that trip shouldn't be that hard.

Before Craig Sebastian, I went over to B.C. Productions, home of the Chocolate Cream and Hott Shyt lines. I saw some of the faces I met through Tyson Cane there. One of them being, my favorite Shorty J. I so want to have a flip-fucking session with him - camera extremely optional. If you recall me rimming him in "The Interview", what you don't know is that when he spread his ass across that sofa, I so wanted to plow his ass for just a little while, then the rest of the day, my ass would be all his. Lucky for me I didn't suggest it, because that scene was shot the day before Tyson Cane's opinion about my cock size not being big enough to top, which meant it would have been made in another inappropriate fashion. Anyway (before I get off the real topic), I gave my info to them as well. I have yet to see any of their movies in their entirety, but considering what I saw playing on the DVD player, and seeing the models that were actually there at their booth, I wouldn't mind getting a few poundings from those studs, and giving out some a taps myself. And from their stares, I don't think they would mind accommodating my fantasy either. They looked at me like my friend A.B. said, "like I'm a piece of chicken, and they're hungry." Well, anytime you're ready, boys, I'll probably be more than willing to satisfy your hunger.


Now, there's a history behind my 1st stop, that's why I saved it for last. A new company named Knight Stick Films. I met the Producer, Writer, and Director Ben Marksman 2 years ago on the set of Michael Lucas' Dangerous Liaisons. He played an extra who was part of the paparazzi while I played an extra at the exhibit during the finale. We had not really talked to each other much that day, but he did take notice of me at one point while I was just walking around and said, "Here's the best looking extra who's not actually part of the cast." 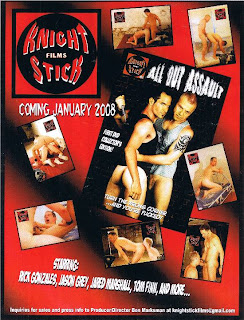 The scene from the movie that I saw playing at their booth was a scene between Rick Gonzales and newcummer, Jason Grey. I've got to envy Jason a bit, and I'm sure I'm not alone. Because although I've had the opportunity to hold Rick's thick and hot uncut member at a go-go dancing gig, and suck it as well, Jason (a.k.a. Lucky Bastard, haha) got to take it in his ass. I actually kind of envy Rick as well. Because as I'm getting an urge to be even more versatile and Jason is a hottie with a great ass, Rick got to plow the fuck out of him, including in a position that I have yet to see in American porn. That is until now.


And YES, I gave him my info, and have already been in contact with Ben about working for him. I was given some details about what may happen, but to avoid jinxing it, I won't say anything more.